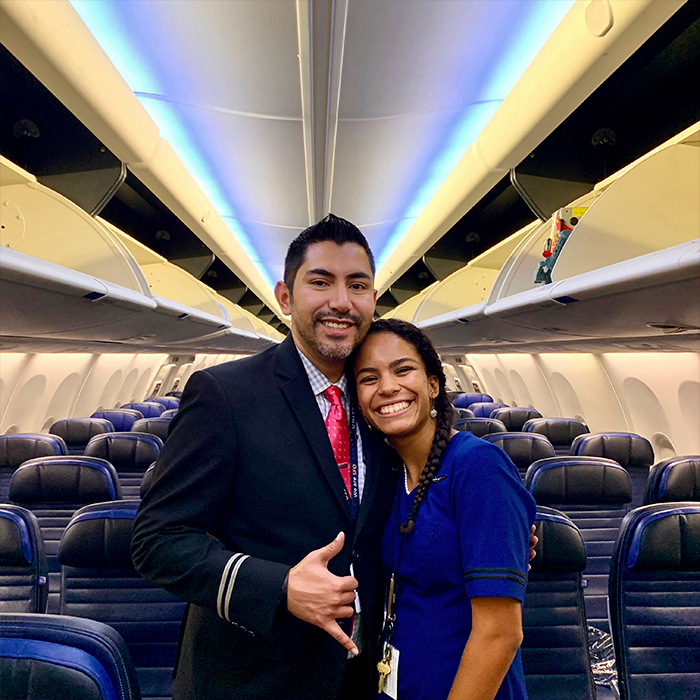 Research Assistant for Brian McCammack sifting through 10,000 photos that were related to the history of Jazz in Chicago

Flight Attendant for Major US Airline

From introvert to social butterfly and campus leader

Who’s the one person during your time at Lake Forest that impacted you the most?

The one person that comes to mind first is David Sanchez Burr. He was my professor for Sculpture 200 during my senior year. At this point, I had a huge case of senioritis, so motivation was super low, and I was super burnt out, but I had to do an art exhibition. I asked him to be my supervisor and he, of course, said yes. I told him in the very beginning, I'm a huge procrastinator, like, that's my thing. I don't think he really knew what he was getting into when he agreed to work with me, but he was there with me every step of the way. Even though I was struggling to hit these checkpoints and get things done by the time I needed to, he was always adapting to what I needed. He gave me time during his class when I should have been working on his assignments to work on my art exhibition, and whenever I'd be in the studio late after hours, he would come and bring me coffee to help keep me awake and just be there for me. He didn't just make sure that I was okay academically, but he was there to make sure I was also okay mentally, which was absolutely amazing. That was going above and beyond as a professor, and I remember when we finally opened the exhibition, he was like, wow, we did this, and he was so proud of me. It was really great to have him there for me when I was struggling the most.

When you look back at your time at Lake Forest, what is one of the best lessons you've learned that you still carry with you?

What comes to mind was something that I learned in a class called Species taught by Glenn Adilson. He would always say that we should use the word “and” more than we use the word “or.” I think it's something that should be applied to real-life because I feel as though we're taught very often that things are very black and white. You know “it's this” or “it’s that.” We can't feel more than one emotion at the same time or you can't be successful and struggling, but that's just not the case at all. Everything is connected and not everything is mutually exclusive. I think when you replace the word “or” with the word “and” you just open up so many opportunities for yourself and don't see everything so constricted and so confined into a box. It really allows you to become more open-minded and see how everything's connected.

How did Lake Forest help shape you to be the individual that you are today?

One of the first things I think of immediately is comparing myself from my senior year of high school to my freshman year of college. Lake Forest really helped me become more of a social butterfly. I've always been an introvert, but Lake Forest really helped me break out of my shell and just be who I was supposed to be. I was able to meet new people, go to different events, and be involved in various clubs and activities. It helped me bloom as an individual socially. I was able to build confidence being at Lake Forest, having so many people who are supporting me and saying how I can do all these things instead of saying what I can't do. Even if I was struggling with something, there was always someone there to support me.

What skills did you work on at Lake Forest that have helped you be successful today?

Leadership was not necessarily something that I consciously thought to work on, but I always found myself being put into positions of leadership, whether that was talking on panels to prospective students or current freshmen or for APPO. I was the vice president of fellowship, and I was the public relations chair at one point, and I always saw myself as a follower. I like to follow instructions and do what people need me to do to get things done. And I never saw myself as being the one to initiate all those things. But at Lake Forest, it was something I always found myself doing, and I definitely appreciate that. It's been so applicable to my job. Another one is time management. It’s so, so, so important in the real world. I think even especially being a flight attendant like if you're late, it's has a whole domino effect on everyone else. It’s something I learned a lot while being a mentor for First Connection. Being reliable and on time is something that's really important to me and being involved in so many activities and clubs at Lake Forest and having to manage my time with social activities and homework was really helpful to develop those skills.

What experiences at Lake Forest have you had that you think have been invaluable to your career?

I'm a flight attendant and something that really helped me during my time at Lake Forest was being a tour guide. Putting yourself in front of a large group of people and being that main focus helped build my confidence to be that person who was standing in the aisle during the safety demo or talking on the P.A. and giving announcements. Another thing that helped me a lot was being a resident assistant. So much of what I learned during my time as an R.A. is applicable to being a flight attendant. Responding to emergency situations and being poised while under pressure or being the person that everyone looks up to when something does go wrong. As a flight attendant, you're the first responder. You're the person who's going to be there to save someone if there isn't a doctor on board. I learned a lot as an R.A., including responding to different kinds of people and learning de-escalation techniques, which has been totally invaluable for my job.