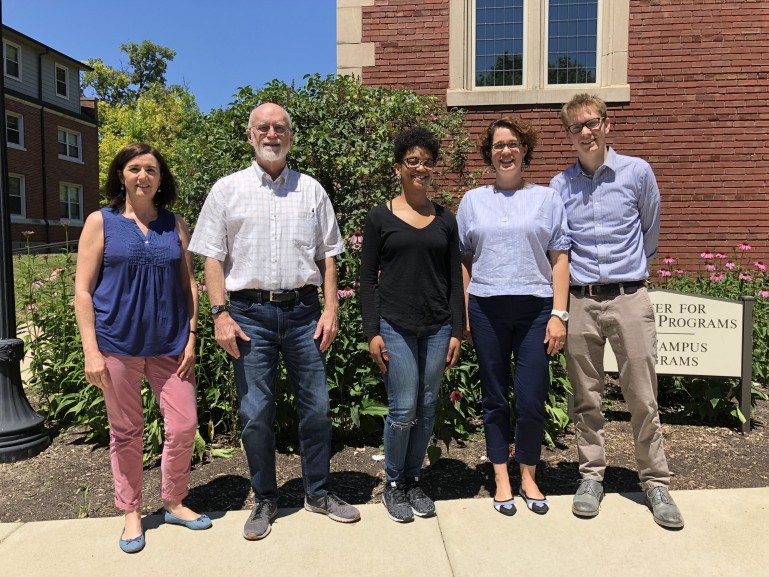 The Chicago Fellows meet regularly and collaborate to develop specific project goals. During their tenure as Fellows, they teach a course oriented toward their research project. Fellows have the opportunity to work with a student Chicago Fellows Research Assistant. At the conclusion of the Chicago Fellows year, faculty produce a digital outcome or deliverable that will become part of Digital Chicago’s online website and digital repository (currently under development). Fellows present their work to the campus community in the fall semester with the  Digital Chicago Seminar, and also will seek opportunities to share their work with the Chicago area public more broadly.

Rebecca Graff continues each year as the Chicago Archaeological Fellow for all four years of the Digital Chicago project.
During Summer 2018, students in SOAN 205: Archaeological Field School will serve as field crew for an archaeological excavation at the 1856 Gray House in Chicago’s Old Irving Park neighborhood. Known for his vocal stand against slavery, John Gray was the first Republican Sheriff of Cook County (1858-1860). In the years after his death, popular narratives arose designating his former home a station on the Underground Railroad. The Archaeological Field School introduces students to the discipline of archaeology, with an emphasis on fieldwork and excavation. Find out more about our Summer Programs.

In the summer of 2015, Graff inaugurated the Archaeological Field School (SOAN 205) at Chicago’s Charnley-Persky House, an urban archaeological site at which she began working in 2010. In fall 2015, students in her historical artifact analysis course (SOAN 225) learned how to analyze the artifacts recovered from this excavation. Graff’s Chicago Fellows Research Assistant, Anne Marie Brugioni ’16, assisted her in the creation of a temporary historical archaeology lab for use by students in field school and lab-based courses. Students use the lab to conduct research and curate materials for both virtual and material exhibits of excavation finds. “ The Charnley-Persky House Archaeological Project” on Digital Chicago’s project repository maps the points of origin in Chicago and world-wide for artifacts found at the site.

Annie Barry, Assistant Professor of Music
“Irish Music in Chicago”
This project will trace the history of Irish music in Chicago since the late 1800s. It would investigate the key musicians and collectors, examine the impact this had on the long-term survival of the tradition on both sides of the Atlantic, and explore the presence of this indigenous music in Chicago today.

Liz Benacka, Assistant Professor of Communication
“Drag in the Windy City: The Political History of Gender Performance in Chicago”
Her project seeks to uncover the legacy of drag in Chicago politics. The first gay rights’ organization in the US was founded in Chicago by Henry Garber in 1924, and gay speakeasies featuring female and male impersonators thrived on both the north and south sides over the course of the city’s history. She will document Chicago’s longstanding tradition of gender performance, including Joan Jett Black, a black drag queen who ran for Mayor of Chicago in 1991 and President of the United States on the Queer Nation Party ticket in 1992, in order to preserve the memory and political potential of drag in the Windy City.

Courtney Pierre Joseph, Assistant Professor of History
“The Sanctity of Stories: Haitian Churches and Oral Histories in Chicago”
There has been a long Haitian presence in Chicago, beginning with the founder, Jean Baptiste Pointe DuSable. A diasporic community formed in the city during the late 20th century, and churches have been an important part of this communal development. This project, as part of a larger study on the history of Haitians in Chicago, will map out the various locations of Haitian churches across the city while also uncovering the stories of the Haitian people who worship there. Through recording their oral histories, this project helps shed light on how and why a Haitian community formed in Chicago.

Make It to Chicago