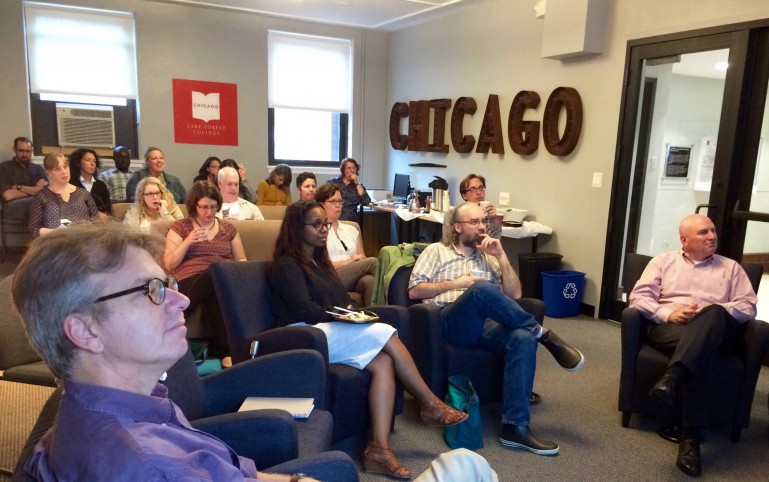 Faculty and staff gather in the Center for Chicago Programs for the Digital Chicago Seminar.

All presentations take place 4:00-5:00 p.m. in the downstairs lounge of the Center for Chicago Programs and are open to the entire faculty/staff community. Light refreshments will be provided.

Among the thousands of Irish immigrants who traveled to Chicago in the 1870s was young Francis O’Neill, a Corkonian from Ireland’s south west. Joining the Chicago Police Department in 1874, O’Neill rose through the ranks to become General Superintendent from 1901-1905 and became affectionately known as “The Chief.” Surrounded by an Irish community who carried with them the songs and dances of their native land, O’Neill, himself a traditional musician, set about collecting, publishing, and preserving the tunes that may otherwise have been lost over time. In a closer look at the man, the Chief, and the music, this digital project, created with the assistance of Chicago Fellows Research Assistant Ani Karagianis, examines O’Neill’s life and work from 1848 until his death in 1936. It traces his global travels before settling in Chicago, considers the opportunities the city provided for him as he gathered songs and tunes from the Irish diaspora, and it shares samples of the melodies from O’Neill’s collections played by Chicago musicians today.

This project builds network databases of social ties at three periods in Chicago’s history, showing participation in major voluntary organizations, clubs, charities, and associations to create social network visualizations. This reconstruction of historical social networks allows us to see how Chicago’s elites organized their social life around changing cultural, political, and economic institutions. The software used will create visual representations of social networks that allow us to identify key individuals and institutions, as well as sites where disparate social neighborhoods were bridged.

Chicago has long been famous for the music it has produced, most notably the blues. Less appreciated is the city’s contribution to one of the largest popular culture movements of the first three decades of post-World War II period: the so-called Folk Music Revival. Although traditional American folk music came mostly from rural areas and small towns, the Revival was largely an urban phenomenon, with Chicago in the forefront along with other large cities. This project features the contributions of two key figures in Chicago’s folk scene during this period: its main “documentarian,” Raeburn (Ray) Flerlage, who left a vast visual legacy of performers and venues, and the “visionary” Winfred (Win) Stracke, who co-founded an institution devoted to teaching and learning folk music, the Old Town School of Folk Music.

“Drag in the Windy City: The History of Gender Performance in Chicago”

This project seeks to uncover the historical practices of gender performance in Chicago by mapping specific locations that featured drag in the city over time. The digital map produced as a result of this research will illustrate the longstanding practice of drag and the vibrant history of queer life in Chicago, particularly how it has migrated over time across the city. Beginning in 1851, reports of individuals dressed in clothing not reflective of their birth gender were reported in Chicago newspapers - despite cross-dressing being illegal until 1973. While the criminality of drag forced individuals who enjoyed cross-dressing to frequent bars and clubs that attracted other illegal activities, such as homosexuality, they also brought together different ethnic groups, a rarity in Chicago’s historically racially segregated neighborhoods. “Boys Town” is a well-established neighborhood on the North Side with queer-positive businesses and drag shows, however, research shows that “Drag Balls” featuring cross-dressing began on the far South Side of the city. This historical timeline culminates in the early 1990s when Queer Nation selected a black drag queen from Chicago (Joan Jett Blakk) to run for President of the United States.

“The Spirit of the Diaspora: Haitian Churches in Chicago”

There has been a long Haitian presence in Chicago, beginning with the founder, Jean Baptiste Pointe DuSable. A diasporic community formed in the city during the late 20th century, and churches have been an important part of this communal development. This project, as part of a larger study on the history of Haitians in Chicago, will map out the various locations of Haitian churches across the city while also uncovering the stories of the Haitian people who worship there. Through a selection of questionnaires and oral histories, this project helps shed light on the role of religion in the making of the Haitian diasporic community in Chicago.

All presentations take place noon-12:50 in the downstairs lounge of the Center for Chicago Programs and are open to the entire faculty/staff community. Lunch, coffee, and dessert will be provided!

In 1945, the  Chicago Tribune held a design competition for modest family homes. Most of the nearly 1,000 submissions are lost, but a few designs were published, and a small number were built. Siobhan Moroney shares insight into what Americans expected in their postwar homes, while the changes in the built homes indicate how American housing preferences have evolved since then.

Shakespeare’s plays have been performed in Chicago ever since the city’s incorporation in 1837. This project traces the history of Shakespeare in Chicago alongside the history of the city itself, looking at the sites of its historic – and in some cases, long-destroyed – theaters, as well as the role that these plays have played in establishing the city’s evolving cultural identity and its vibrant theater scene.

All presentations will take place in the downstairs lounge of the Center for Chicago Programs and are open to the entire faculty/staff community. Light refreshments, such as a small salad bar and dessert, will be provided, to supplement a brown-bag lunch.

Like any other memento from an enjoyable trip, musical souvenirs such as the piano and vocal pieces Meyer has studied offered audible memories for people to buy, take home, and play in their parlors as a reminder of their visit to Chicago and the World’s Fair. Meyer’s presentation explores these souvenirs from the 1890s, a time when parlor music reached the pinnacle of its popularity.

“Is the Pledge Dead or Just Dying?: An Autopsy of the Pledge of Allegiance”

This presentation examines the Pledge of Allegiance, taking into account its historical origins (in Chicago, 1892), intended and enacted meanings and uses, and evolution and relevant controversies.

Jane Addams’s Hull House is the birthplace of a radical form of art-making—improvisational comedy. This project examines that unusual genealogy and traces this focus on social justice in theatres throughout Chicago.

Zeller discusses his latest work for his 360° digital tours of Chicagoland sacred spaces, including First Presbyterian Church in Lake Forest and a digital recapturing of Chicago’s historic Pilgrim Baptist Church, which suffered extensive damage from a fire in 2006, and remains unrepaired.

Jane Addams’s role as Chicago’s “beloved lady” changed precipitously with her outspoken embrace of pacifism after the outbreak of World War I. This study focuses on the years during and following the Great War, roughly 1915 to 1930, during which time Addams emerged, in the United States and abroad, as a leading anti-war figure and advocate for a radical, post-war international order.

“Restrictive Covenants and Housing Discrimination in the Chicagoland Area”

Chicago played a vital role in the development and spread of housing discrimination nationwide. This study investigates one of the many widespread housing discrimination strategies, restrictive covenants, which officially prohibited the sale or transfer of Chicago-area houses to minorities. Like other strategies, such as redlining and legal segregation, restrictive covenants are at the heart of today’s unequal school funding, since U.S. schools are funded primarily with local property taxes.

Make It to Chicago