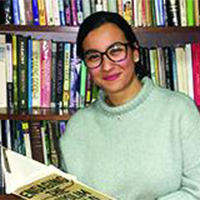 When Nouha Ezouhri (France/Guadeloupe, UWC Maastricht, Lake Forest ’19) interned last summer in the office of the Lake County state’s attorney, she observed the impact lawyers can have on people and families. And she began to see her path.

“It’s about helping people get second chances, and helping them get past difficult times in their lives,” she says about what she learned of the law. “It’s a very inspiring job.”

After her first year at Lake Forest, she spent the summer working with a psychology professor, Susan Long, on research into dating violence. Nouha designed a training program for teens, parents and teachers at neighboring schools in recognizing and preventing relationship abuse.

“It was after that research that I really started to explore my options,” Nouha says. “I enjoyed working with people around advocating for what is right.”

Nouha is much engaged in campus life. She’s a resident assistant, she’s involved with the campus honor society Omicron Delta Kappa, and she’s president of the Muslim Student Association, for which she has organized a number of learning and discussion events.

“I grew up in the Caribbean, where I was always part of a minority,” Nouha says. “I am always fully aware that I am the face of Muslims, and I’m responsible for the impressions I make on people.

“It’s difficult sometimes. It was especially difficult during the elections, when people had a lot of polarized opinions. But I think this is the most important thing we can do — just to educate people around us, and impact them in positive ways.