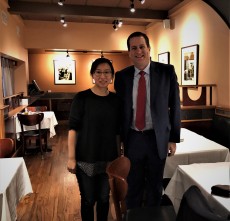 As a part of his 25th Reunion, Lake Forest Alumni,Scott Pozil, visited current undergraduates to describe his past and current career endevors. Mr. Pozil is currently the Commercial Counsel at the U.S. Embassy in Beijing and focuses primarily on commercial and trade issues.

He was very generous in giving one hour of his time to Chinese language students to discuss China and his experiences there. He explained how he conducts business in China, which was very beneficial information because some students are interested in doing business in China in the future. Mr. Pozil also discussed some of his favorite aspects of China and how there is major disconnect between the United States and China. He said that there is very little understanding in Chinese culture, but if we, Americans, took the time to fathom their culture, business affairs among other things would be relatively easier.  The information that Mr. Pozil discussed with the students was very informative and interesting, and will be helpful in future tasks pertaining to Chinese affairs.