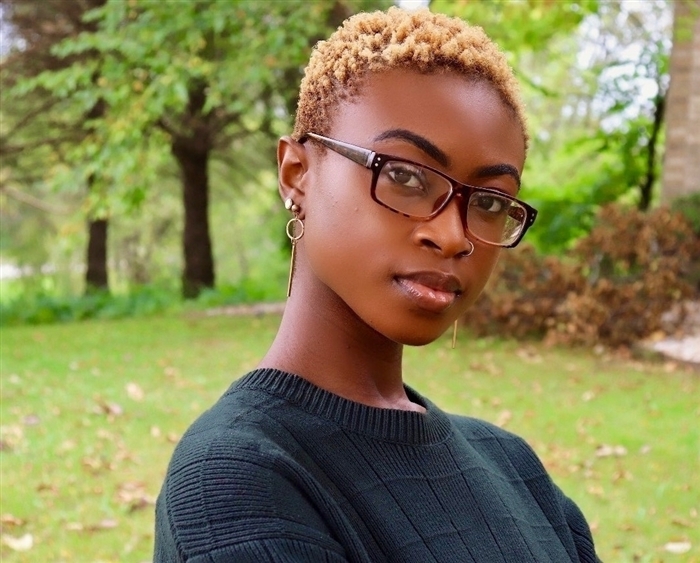 When Uche Okeke ’21 started at Lake Forest College as a first-year in fall 2017, she took to heart the advice to try new things and get involved.

“Put yourself out there,” the Rockford, Illinois resident recalls hearing. “I really internalized that,” she said, vowing to herself “to do everything I could and everything I had time for.”

In her first few weeks on campus, Okeke ran for Student Government Class of 2020 Senator—and won. “The rest is, kind of, history,” she said.

Since then, Okeke has held numerous positions at the College, including member of the Student Government Executive Board, president of UMOJA, sponsorhship and budget manager for TEDx Lake Forest College, Student Ambassador, Orientation Leader, First Connection Mentor, and student member of the Diversity and Inclusion Summit, the Coalition Against Sexual Misconduct, and the Academic Honesty and Judicial Hearing Board, to name a few.

A senior who is majoring in economics and double minoring in international relations and history, Okeke is honored to be the College’s 2020 Student Laureate of The Lincoln Academy.

The Lincoln Academy’s Abraham Lincoln Civic Engagement Awards are presented annually for excellence in curricular and extracurricular activities to seniors from four-year, degree-granting institutions of higher learning across the state. This year, Okeke is among 56 recipients from colleges and universities that participated in the program.

“It’s awesome to see my name up there with the other recipients over the years,” she said. “It's really humbling.”

Okeke plans to take a gap year after graduating in May 2021. “I feel I need a break to recalibrate” before going to graduate school, she said. Okeke will work on building her portfolio toward her goal of becoming a documentary filmmaker. “I hope to use economics and data to tell stories and history in a way that makes sense for people,” she said. “That’s my dream job.”