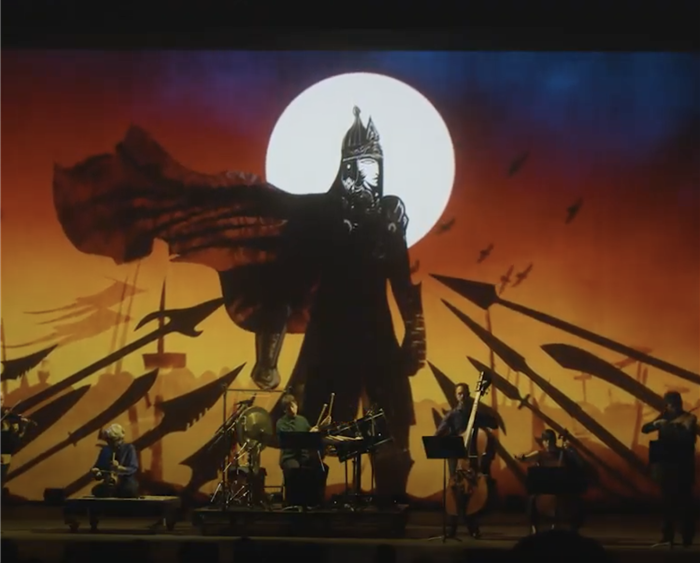 Ahmad Sadri, along with Yo-Yo Ma and the Silk Road Ensemble, challenges cultural and racial tensions with their modern take on world mythology.

Professor of Islamic World Studies and Sociology Ahmad Sadri was a key figure in the production of “Heroes Take Their Stands,” a multi-media live performance celebrating the folk heroes of mythology from cultures all around the world.

Sadri came up with the idea of “Heroes” in 2013 after realizing the similar artistic choices throughout cultures and time periods of their respective mythological heroes.

He pitched the concept to world-renowned musician Yo-Yo Ma and the Silk Road Ensemble with the hope that they would bring his vision to life. With everyone enthusiastic about the concept, they spent the next several years raising funds for the endeavor.

The project started taking shape in 2016, when Sadri began choosing composers to represent different world cultures: heroes from Greek, Iranian, Indian, Chinese, and American culture. With the characters and their stories chosen, Sadri and members of the Silk Road Ensemble began composing the accompanying music, dance routines, and video for the performances. The project entered its final stages in the Spring of 2019 while Sadri was on sabbatical from Lake Forest College.

An important theme that Sadri wanted to convey was the idea of the universal humanity and  struggles all people face.

“Different times, different places, different cultures, same humanity and the same messed up choices that we have to deal with,” Sadri said. “My idea of a hero was not a superhero or somebody who has superpowers, but people very much reflecting the tough choices that all of us have to make.”

To further the theme of racial and cultural unity, the orchestra utilized musical instruments from a variety of cultures for all of the performances. Sadri describes the music as “internationalist,” signifying common humanity despite racial tensions, and forming an artistic unity of mankind.

Four performances of “Heroes” were given in spring 2019 across California to much critical acclaim. The Los Angeles Times praised the performances and said of the show: “Musical mission accomplished.”

A final performance was given to an enthusiastic crowd at the Eisenhower Theater in Washington, DC.

Looking ahead, Sadri hopes for future performances in Chicago and is working on having the pieces published in different languages and, possibly, taught in classrooms. There’s also a documentary on the making of “Heroes” in the works.

Sadri said people should read all of the holy books and mythology. “This is not nonsense,” he said. “This expresses the collective subconscious of humanity. And if we don’t know that, then we have deprived our minds from a great part of the history of human thought.”