Notes from Abroad: Jared in Madrid 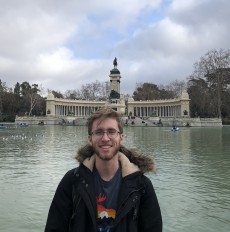 ¡Hola! My name is Jared, and I have been spending my junior year studying abroad. For my spring semester, I decided to study in Madrid, Spain. I am studying International Relations and Spanish, and what better way to learn in both of those fields than to live in a Spanish-speaking country. I spent roughly one and half months in Madrid before having to return due to the coronavirus. Despite only being in the beautiful city of Madrid for such a short span of time, it was one of the best experiences of my life. Coming into this semester, I was confident about my Spanish since I had just spent a semester living with a host family in Ecuador. However, once I started classes I felt as if I had never heard of Spanish before. Having to adjust to a new verb form I had never used or been formally taught along with the varying accents of Spain was one of the harder parts of my transition, and a lot of the time I had to rely on context to get by. These types of adjustments helped me vastly improve my Spanish in such a short time frame. Besides that initial hiccup, the professors were always super helpful and friendly and made it clear that they cared about my education and well-being.

Even though there were a few road bumps along the way, I met some of the most amazing people and have made so many new friends who I hope to visit again someday. Coming from so many different countries and backgrounds, I feel like I learned more from the people I met than one could hope for in a lifetime. Additionally, unlike previous experiences, I did not have the same network of Americans around me, with only one other exchange student being from the US, which forced me far out of my comfort zone. There I met Argentinians, Italians, Greeks, and Brazilians to name a few of the people’s nationalities all of whom I cannot wait to meet up with again. Each and every one of the friends I made gave me hope for a better, brighter future.