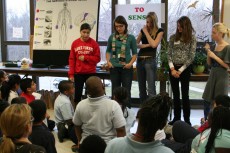 First-year students engaging young children in interactive activities that helps them understand how our brain senses our ...
January 05, 2011

In Fall 2010, on November 30 and December 2, twenty-eight students of the two sections of the FIYS106 Medical Mysteries: Neuroscience in Chicago course, taught by Associate Professor of Biology Dr. Shubhik DebBurman, partnered with the student organization SYNAPSE and the College’s North Chicago Partners program, and conducted an innovative capstone brain outreach with elementary school children from North Chicago that replaced the traditional final exam for that course and exposed young eager minds to the amazing human brain and its mysteries.

This event served as the final leg of diverse academic outreach activities of the 2010 Brain Awareness Campaign at Lake Forest College.

Lake Forest College first-year students partnered with fourth and fifth graders of the Forrestal Elementary School and AJ Katzenmeier Elementary Schools of North Chicago. Each school sent 20-25 children during their after-school hours to the college where they spent nearly two hours  (3-4:45 pm) with our students.

The first-year students had learned these basic neuroscience through lectures, videos, textbook and other materials earlier in the semester.

To help the first year students become effective teachers, Dr. Anne Grall Reichel from the Education dept led an interactive teaching practices workshop in October with the students teaching them the theory and practical issues of how to effectively teach fourth and fifth graders. The fourteen students of the fall semester BIO362 Mechanisms of Brain Dysfunction students served as peer mentors to the FIYS students throughout the semester for many projects including this final one. The workshop and the long-term peer mentoring were critical to the outreach success.

The actual outreach had two components.

1) First, Professor DebBurman lead an “Introduction to the Amazing Brain” human brain anatomy session for 20 minutes with the elementary school children. These students wore white labcoats, lab goggles, and gloves and they were allowed to touch and feel several preserved brain specimens (from Sheep, cows, and humans).

2) Second, the students visited three teaching stations spaced sequentially on the Johnson Science Building Bridge. At each station, students 1) first engaged them with1-3 hand-on activities to make them aware of the skills (to either sense, integrate or act) they were using, followed by an interactive discussion with students on how the brain is specifically used for that set of functions.

Each first-year student group made and used a brain poster to teach students the main concept and also gave a goodie bag to each child to practice some of their interactive activities at home. So, each child went home with three goodie bags.  Each child also got a book about the nervous system to read and learn from later.

They spent 15 minutes at each station, where groups of five FIYS students engaged the children in how:

THE BRAIN THEN INTEGRATES: