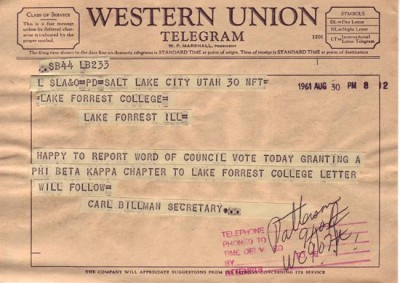 When in 1955 I was offered a position at the College, about which I knew nothing, I immediately studied the catalogue to learn about the faculty and the curriculum.

Encouraging as these were, I was disconcerted that there was no Phi Beta Kappa chapter, a national recognition of academic excellence. But soon after I arrived we made an application for membership which this time proved successful, though only after the most rigorous study in the institution’s history.  This was followed by a visit to campus of two examiners, distinguished professors from Columbia and Kansas, who went through files and wandered about, astutely interviewing students, faculty, staff. One of the team decided to visit a class of mine on literature.

The student responsible for the discussion that day was bright but feckless.  Should I alert her?  No, I decided, and crossed my fingers. She turned up as did the Grand Inquisitor, who was so excited by the session’s topic that he took over for the whole hour, leaving with the reflection that it was a good class indeed.

For many more reasons than this, the College in 1961 was granted its chapter, so important not only for significantly rewarding student achievement but for strengthening our liberal arts orientation and our national reputation. 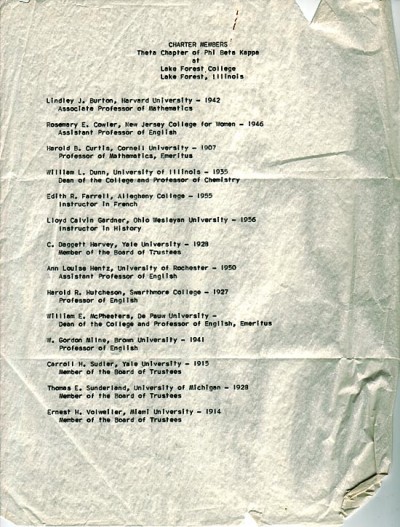