In the United States, eastern hemlock occurs throughout New England, the mid-Atlantic states, and the Lake States, and extends south in the Appalachian Mountains to northern Georgia and Alabama and west from the mountains into Indiana, western Ohio, and western Kentucky.  At its northern limit, eastern hemlock ranges along the southern border of Canada from southern Ontario to Cape Breton Island, Nova Scotia.

Eastern hemlock occurs as a dominant or codominant in coniferous and
mixed-hardwood forests.  It is often the only conifer present in mixed
mesophytic forests of the eastern United States

Non-human: It provides protective cover. Deer and rabbits eat its lacy needles, birds such as Chickadees, and small mammals enjoy the small seeds inside the tiny cones, and porcupines chew its inner bark.

Humans: Lumber production from eastern hemlock reached its peak between 1890 and 1910. Primary uses were in light framing, sheathing, roofing, subflooring, boxes, crates, and general millwork. Much of the present production is used in pulping or newsprint and wrapping papers, but the demand for hemlock lumber appears to be increasing again.

Pests: The Hemlock Woolly Adelgid (Adelgis tsugae), native to Japan and China, has devastated the Hemlock populations of the Eastern U.S. since it was first reported in 1950.  Although horticulturalists are using chemical injections and biocontrol methods, the aphid-like insect continues to spread quickly, increasing its range by about 10 miles per year. 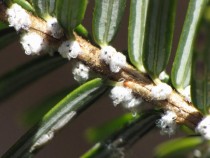 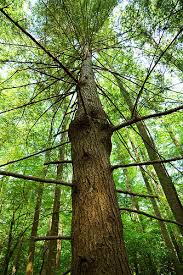