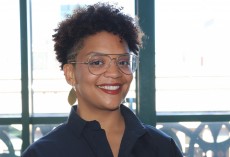 Courtney Joseph, Assistant Professor of History and African American Studies, was a guest on the Windy City Podcast and joined by historian John Swenson to discuss Chicago’s earliest permanent settler to the area, Jean Baptiste Point de Sable, a trader, farmer, man of color, and Chicago’s first founder. Featured in the Forester News.