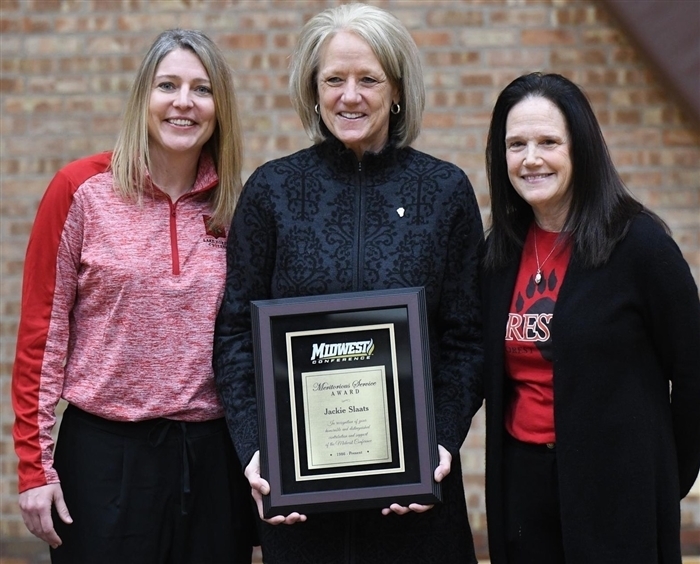 Slaats has served Lake Forest College and the MWC as a basketball coach (1986-2008), volleyball coach (1986-92), director of athletics (1992-2019), and athletic direct report (2019-present). She has been a member of numerous conference committees during that time, including the MWC Oversight, Championship, Competition, and Awards Committees in the last 20 years. She also assisted the league in its search for a new executive director nearly a decade ago.

The nomination for the award came from former Knox College Faculty Athletic Representative Larry Welch, who commented, "as a long-time MWC representative, I think Jackie is deserving. She was an AD for many years, and was the longest serving AD in the MWC for her last few years. I also appreciated her leadership, not just of her own institution, but as someone committed to moving the conference forward and someone who wanted to have an honest conversation about the issues whether you agreed with her or not. You felt good having your institution in a conference with Jackie's, as she was always concerned about the overall direction of the MWC. She was a great role model for newer AD's in the conference."

Current MWC Executive Director Heather Benning, who has been affiliated with the league as a coach and administrator since 1995, also noted the contributions Slaats has made to the conference. "It is rare for a league to have the benefit of engagement of a single individual in a multiple of capacities - from coach, to athletic director, to ultimately the Athletic Direct Report," she commented. "Over Jackie's 35+ years with the league, she has served in each of these capacities and in every one of them excelled and been recognized by her colleagues as 'the model' for each designation. I feel extremely fortunate for the mentoring I personally received from Jackie early in my career and am grateful for what has grown into a professionally-based friendship that is central to my understanding of what it takes to be excellent in higher education administration."

"I am incredibly honored to receive this award and humbled to have been nominated," stated Slaats in her speech after receiving the award. "The Midwest Conference has a longstanding history of academic and athletic excellence and I have always been pleased and proud to do everything I can to help advance the league, our member institutions, and our student-athletes. I have also had the good fortune of working closely with several conference colleagues who share this passion for excellence and that has been personally and professionally rewarding."

Saturday's presentation took place at halftime of the Forester women's basketball team's game against Knox College. It was also Alumni Day for the team Slaats coached to a 386-133 record, six conference titles, and five NCAA Tournament appearances in 22 seasons.