Alumna featured in newspaper article for ‘giving back’ 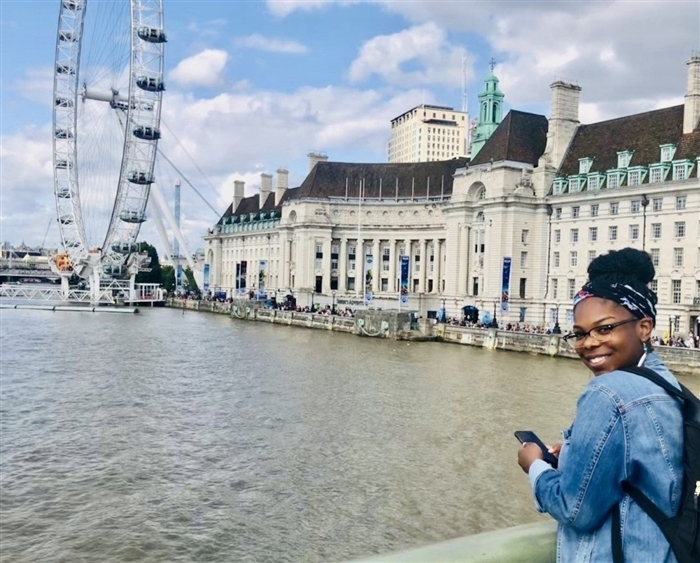 Ayana Bankston ’18 in London while attending a teacher seminar at Oxford University through The Gilder Lehrman Institute of American History.
May 11, 2021
Linda Blaser

Ayana Bankston ’18, an education and history double major, was featured in a Chicago Tribune article on Waukegan High School grads who have returned to their hometown to serve their community.

Bankston teaches African American studies and United States government and civics at her high school alma mater. She volunteers at Shiloh Baptist Church in Waukegan, where she has been a member since birth.

“My time at Lake Forest College provided me with the skills and confidence to begin my career knowing that I can be an advocate for all students,” Bankston said. “The incredible people I met at Lake Forest continue to inspire my own educational philosophy and offer ongoing support throughout my own personal and professional endeavors.”

The following article was published on the Chicago Tribune website, on May 3, 2021:

Waukegan High School grads return to make their mark: ‘I want to serve my community’

An appetite for hard work and community involvement — developed while classmates at Waukegan High School less than 10 years ago — helped six graduates from the classes of 2013 and 2014 attend elite colleges before returning to make a difference in their hometown.

Among the group is an elected official, a municipal board member, a political organizer trying to help 11 million people become citizens, a teacher at her former high school and a man helping those a few years younger than he follow a similar path. All are involved with multiple activities.

Ayana Bankston, Carlos Catalan, Andrea Flores, Adriana Gonzalez, Karina Martinez and Josue Pasillas are Waukegan graduates who went to top colleges with the help of financial aid, and are now working in the city with a passion to make an impact on their community and beyond.

Gonzalez, 24, was elected to the Waukegan Community Unit School District 60 Board of Education April 6. A member of the Waukegan class of 2014, she earned her undergraduate degree from Pomona College in Claremont, California, four years later. She also serves on the schools foundation and does community outreach for small business loans at a local bank.

Flores, 25, was a classmate of Gonzalez who holds a bachelor’s and master’s degree from Stanford University. Serving on the schools foundation too, she is digital organizer for America’s Voice trying to create a path to citizenship for the 11 million undocumented people living in the United States. She is also a member of the Latino Coalition of Lake County.

Bankston, 25, also a member of the class of 2014, graduated from Lake Forest College and is working on a master’s degree from Northwestern University. She teaches African American studies and United States government and civics at the high school. She volunteers at Shiloh Baptist Church in Waukegan, where she said she was a member since birth.

Also part of the class of 2013, Martinez graduated from Knox College in Galesburg and is pursuing a master’s in public policy at the University of Chicago. She is the library’s communications manager. She is also active in both the Latino coalition and the Antmound Foundation, which helps formerly incarcerated people adjust and find jobs.

Catalan, 25, and also a 2013 Waukegan gradate as well as its class president, is currently a program manager for the RISE program at Beacon Place. He said he took a longer route before studying at the University of Chicago. As a DACA recipient, many avenues of financial aid were closed to him.

U.S. Rep. Brad Schneider, D-Deerfield, knows many of the people in the group. He said they and others like them are the future of the areas he serves in both Lake and Cook counties in the 10th Congressional District.

“Young people are our future,” Schneider said in the email. “Lake County is counting on our best and brightest to raise up and serve the community.”

While all six said they knew classmates who had no interest in making Waukegan their permanent home after finishing their education, whether after high school or college, it was not a question for them. They all reside in the city now except Bankston, who lives in Grayslake. She intends to return.

Flores started her post-college job in Washington, but when the coronavirus pandemic closed everything down she came home working remotely. When she got the all clear to return, she chose to continue doing her job from home.

“I felt it was the right place to be,” Flores said. “When I was gone I was missing it. My family is here. Waukegan just feels like home, and there is so much happening.”

“California is a nice place, but Waukegan has a special place in my heart,” added Pasillas. “I want to serve my community and help other people get on the same path I have taken.”

Catalan was living in Chicago while in the program at the University of Chicago. His return to Waukegan was family-based after his father died of COVID-19. Family obligations took first priority. He found the job at Beacon Place, organizing a mentorship program for people entering high school and going into their senior year there.

“It will give the students with someone who has a different outlook of what success is about,” Catalan said.

Giving back to the community is also a trait which runs through the psyche of this sextet. Gonzalez said she became involved in advocacy groups in college, and it continued when she returned to Waukegan. She organized a petition drive to keep police officers out of the high school campuses in the wake of protests after the killing of George Floyd almost a year ago.

“I knew a lot of people, and talked to a lot of people. I met people who wanted to do something about social justice. The George Floyd vigils gave us a lot of energy.” Gonzalez said. “We established a scholarship,” she added, referring to her foundation work with Pasillas and Flores.

Bankston said she is not only making a difference teaching Waukegan teens, but is a role model as an African American teaching primarily people of color. It helps if they see a person who looks like them.

“It absolutely makes a difference,” Bankston said. “Sometimes they come to me because they know I have a different understanding. It is a big help.”

Both Catalan and Martinez are DACA recipients while Pasillas, Gonzalez and Flores are children of immigrants.