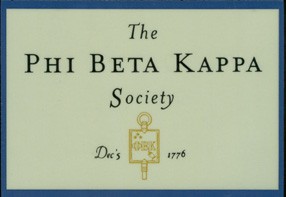 Phi Beta Kappa, the nation’s oldest and largest academic honor society, was founded on Dec. 5, 1776, by five students at the College of William & Mary in Williamsburg, Va. It was the first society to have a Greek letter name. And in its early years it introduced the essential characteristics of such societies: an oath of secrecy (discarded in 1831), a badge, mottoes in Latin and Greek, a code of laws, and an elaborate initiation ritual. The members held regular meetings, generally with an emphasis on literary exercises, especially composition and debating. Fraternal sentiments were fostered, and the purpose of some meetings was simply good fellowship. Anniversaries were celebrated in the Apollo Room of the Raleigh Tavern, which the College of William & Mary has recreated on its campus in Phi Beta Kappa Hall.

The original Phi Beta Kappa Society was active for only four years because the approach of the British Army under General Cornwallis forced the college to close. But the faith of those youthful scholars in the future of their Society is shown by their preparation of charters for branches at two other institutions. A charter was voted to Harvard, on Dec. 4, 1779, and to Yale four days later. The charters were delivered-in reverse order— to groups of students in New Haven, Conn., and in Cambridge, Mass., creating Alpha of Connecticut at Yale in November 1780, and Alpha of Massachusetts at Harvard in September 1781. This began the tradition of designating each state’s chapter with a letter from the Greek alphabet to indicate where it fits chronologically in that state’s chapters: Alpha of Virginia at the College of William & Mary was inactive between 1780 and 1851, and again from early in the Civil War until 1893. However Alpha at Harvard has had an uninterrupted existence, and Alpha at Yale has had only one inactive period, from 1871 to 1884. These chapters largely determined the permanent character of Phi Beta Kappa and shaped its policy on the establishment of other new chapters. The two New England branches preserved the essential qualities of the Virginia experience, adopting changes in procedure to suit local conditions. Shortly before the end of the academic year, the members selected from the junior class a small group of outstanding students who, the following year, constituted the “immediate society.” Later this role would be assumed by faculty members who had been invited to join Phi Beta Kappa as undergraduates, and most of a chapter’s new members would be initiated as seniors.

Fifty years after the Society’s move into New England, only four more chapters existed: Alpha of New Hampshire at Dartmouth in 1787; Alpha of New York at Union in 1817; Alpha of Maine at Bowdoin in 1825; and Alpha of Rhode Island at Brown in 1830. The new charters were granted by the concurrent action of the existing Alphas. Fifteen more chapters were established in the next three decades. In 1883 the United Chapters of Phi Beta Kappa was founded, which provided a unified organization for the Society. By that time, 25 chapters had been chartered, although not all were active, and about 14,000 members had been elected. Alpha of Vermont, at the University of Vermont, admitted the first women members in 1875. And in 1876, four women were elected by Gamma of Connecticut at Wesleyan. Although this step was regarded in some quarters as revolutionary, it aroused no formal protest. A few years later, when a general constitution and bylaws were adopted, the right of women to membership was accepted without question. The University of Vermont also led the way in electing the Society’s first black member, who was initiated in 1877. The first black woman member was elected at Cornell in 1905. The first Society chapters at historically black institutions were established at Howard and Fisk, both in 1953.

Since 1883, the number of chapters has increased from 25 to 270, and membership has grown accordingly. In 1900, when the first general catalogue was published, the living membership was about 10,500. Today it is more than 500,000. As the organization acquired a truly national character, some members created off-campus groups in their communities, called Phi Beta Kappa associations, to foster the Society’s educational mission. The development of the associations made it clear that the term “United Chapters” - implying existence only at colleges and universities — no longer described the scope of Phi Beta Kappa’s programs. In 1988 the delegates at the 35th Triennial Council voted to change the organization’s name to “The Phi Beta Kappa Society.” This inclusive designation, also the historic name of the Society, now appears on all of its legal documents and publications.