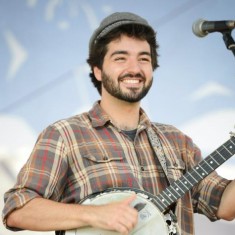 Musician in the Grammy winning band The Okee Dokee Brothers

I came to Lake Forest with a small amount of Spanish language knowledge from high school basics. I loved the classes I took because they showed me different perspectives on the language. It wasn’t simply about learning the language, but delved deeply into the cultures of countries that speak Spanish. For example in one Spanish grammar class I had, we focused on the differences between Cuban and Mexican styles of speaking by looking at poems and songs of each country.

The program highly recommends studying abroad as a way to improve students’ Spanish language confidence and ability. My time in Costa Rica was essential to gaining fluency in the language, and helped to open my worldview. Looking back, I realize that I was attracted to Spanish because of the musical nature of learning a language. It’s like learning an instrument in that fluency is a great reward, but there is no end to gaining knowledge and improving.

My professors were a huge influence on me in ways beyond teaching the Spanish language. I took every class of David George’s that I possibly could because of his wit and knowledge as a translator. And I’m still in contact with Professor Meneses, which is something that would never have occurred at a larger university. I’m grateful for that.

Though I became a musician and not an internationally respected interpreter for world powers, the Spanish I learned in school has become an important part of my songwriting. My band, The Okee Dokee Brothers, released a Spanish language for English speakers album in 2010, and our new album will feature a song in Spanglish that I wrote. The new song focuses on bridging divides between languages and cultures. Without my Spanish classes at Lake Forest, I never could have written that song.