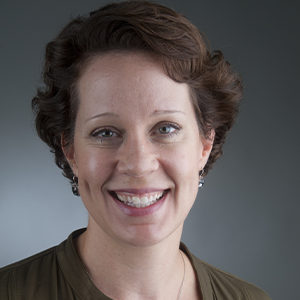 Examining the rhetorical function of satire, parody and irony in order to understand how humor acts as an argument and contributes to civic discourse in the public sphere. Focusing on how gender and sexuality impact a citizen’s visibility and rhetorical agency within the public sphere, particularly the similarities and differences between drag and transgender as embodied arguments about gender conformity.

Review of Transfeminist Perspectives In and Beyond Transgender and Gender Studies, edited by Anne Enke. Electronic Journal of Communication 25, nos. 1-2 (2015).

“Making a Wave: A Rejection of the Equal Rights Amendment in 1970,” Rhetoric Society of America Biennial Conference, Philadelphia, PA, May 2010.

“Uniting and Dividing Through Laughter: The Rhetorical Functions of Topical Humor,” Rhetoric Society of America Biennial Conference, Minneapolis, MN, May 2010.

“Rhetorics of Marriage and Family: The Public Nature of a Private Institution,” Rhetoric Society of America Biennial Conference, Seattle, WA, May 2008.

“Not All Humor is Created Equal: A Rhetorical Examination of the 2004 and 2006  National Correspondents’ Dinners,” Rhetoric Society of America Biennial Conference, Memphis, TN, May 2006.

“Latin Rhetorical Theories of Humor: Have You Heard the One About Cicero, Quintilian and the Unknown Auctor?” National Communication Association, American Society for the History of Rhetoric, Boston, MA, November 2005.

“Laughing in the Face of Tragedy?: A Rhetorical Analysis of Talk Show Monologues after the Attacks of September 11, 2001 ,” International Society of Humor Studies, Youngstown, OH, June 2005.

“Pro-Life, Pro-Choice and None of the Above: Satire and Consciousness Raising in Citizen Ruth,” Midwest Popular Culture Association, Cleveland, OH, October 2004.