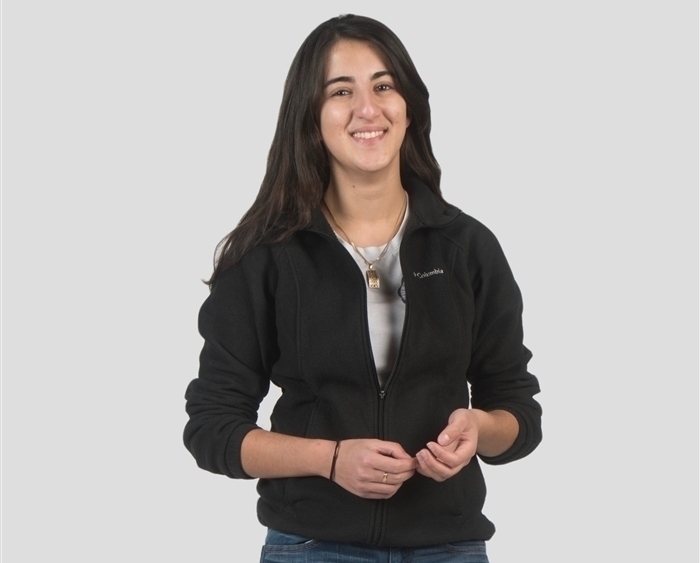 As a student, Sima Riahi ’19 created NibiPure, a water harvesting system with a built-in filter that catches rain water or water from home gutter systems.

Sima majored in biology and hopes is to pursue a career in the health field as an advocate for those who do not have access to regular health care, paying special attention to pediatrics.

Inspired by the water crisis in Flint, Michigan, Sima and Karla Figueroa ’19 decided to create something that would tackle this crisis, and thus NibiPure was born. NibiPure is essentially a water harvesting system with a built-in filter that catches rain water or water from home gutter systems. The word “niba” is the word for water in the Ojibwe tribe, who used to inhabit Michigan before the settlers came in.The duo was selected from applicants worldwide to pitch their idea—a collapsible barrel with a built-in filter to make contaminated water usable—in the esteemed Values and Ventures business plan competition at Texas Christian University.

Entrepreneurs find problems worth solving and mobilize the resources to solve them. Did you think of yourself as an entrepreneur before engaging with the Entrepreneurship and Innovation program? How has this impacted your self-image?

This experience has definitely pushed me out of my comfort zone. People always told me I was good at public-speaking, but I never believed them. Now I feel a huge difference with being on stage and speaking to people. It feels more comfortable and natural. I am also able to articulate my ideas more clearly and entrepreneurs need be able to ask for anything, which I never thought I could do.

How have you gained more confidence selling yourself and your ideas after engaging with the Entrepreneurship program?

I believe in my idea more and I believe the change that NibiPure can make in communities is going to be impactful. I am also confident in not only backing the product, but also backing the values it has too. These values include asset-based community development that empower people to make a change rather than just throwing money at the problem. We want NibiPure to bring people together which is why we want to offer 10% of the profits to the communities in order to give back and gain more resources.

Who have you asked (and for what), and has their answer surprised you?

I reached out to Emily Sioma, Miss Michigan, on Facebook and I didn’t think she would respond. But she did. I will be interviewing her in the next few days.

What has been the biggest challenge in getting people to help you?

The biggest challenge so far has been getting key stakeholders, figuring out who are the right people to talk to, and actually getting the funds to test the barrel and design the filter.

What resources do you still need to complete the project?

We’re in the process of getting customer testimonials of people who have been in natural disasters and seeing what communities need. The biggest thing right now is obviously the funding.

Has asking for help been a challenge for you?

Initially, asking for help was a huge challenge and I relied on my partner Carla to do the asking for me. Asking for help has been a lot easier since I took the Entrepreneurial Sales class

Like scientists, Entrepreneurs need to know how to reframe failure as usable data. What has been the failure that has helped you the most?

Carla and I applied to the Projects for Peace Grant which is $10,000 for you to fund a grassroots project in any country in the world. We were rejected. Then, we wanted to go to Mexico after the earthquake to do research but that trip got cut short. Having both these opportunities fall through sucked. But then we were in the cafeteria one afternoon and came across a PitchIt! promo and I told Carla we should just try that instead. We then revamped our idea, and after many hours we finally decided on a design with help from Carla’s high school professor and the MakerSpace.

A personal failure would be the inability to ask for help, ironically, and having those tough conversations with people.

If you could ask anyone for anything, and get, in the context of your project, what would that be?

I would ask stakeholders in Puerto Rico and Mexico to connect us with aid and relief organizations. We would also ask our ultimate customers what they need most and what hindered their ability to feel safe at home.

You’ve mentioned your partner quite a lot. What’s the dynamic like working in a group?

It’s been great. Our team works really well because Carla is an optimist and I am more of a realist. It’s a messy partnership, but a great partnership. We complement each other because she will fill in the gaps with things I’m lacking in and I will do the same for her.

What has been the most valuable lesson you have learnt while working on this project?

The importance of collaboration and the importance of asking for help with your project and not doing everything on your own. Personally, this has been a huge confidence boost and it has reframed the way I think about failures, especially on the small things.