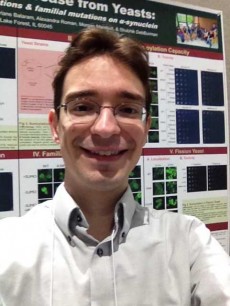 Ganev—a neuroscience and chemistry double major—traveled to San Diego, California at the end of the 2017-2018 academic year to present his research at the national American Society for Biochemistry and Molecular Biology conference.

“The conference was one of the most exciting experiences I have had,” Ganev said. “It was wonderful to speak in front of scientists of all different levels, and I was impressed by the fact that even professional researchers were willing to pay close attention to a poster given by an undergraduate.”

His research focuses on alpha-synuclein, the protein that misfolds in the brain to cause Parkinson’s Disease. Specifically, the goal was to determine how post-translational modifications of this protein affect its toxicity, localization, and expression levels.

Ganev has been involved with the project for over two years, starting during his first year as part of the Richter Scholar program. He works as a member of Disque D. and Carol Gram Deane Professor of Biological Sciences Shubhik DebBurman’s lab team.

“I am extremely thankful to have been designated as a Bartram Scholar, an opportunity that has allowed our lab to have the funds to sponsor my work,” Ganev said. The national grant from the Parkinson’s Disease Foundation allows Ganev to obtain scientific materials for his lab and provides travel funds, as well.

Ganev acknowledges the help of fellow scientist and peer Paul Jones ’18 as well as lab mentor Rosemary Thomas ’18. Jones—also a neuroscience major—attended the national conference as well to present his senior thesis work from the DebBurman lab. He is now pursuing his PhD at Washington University in St. Louis.

Working closely with Jones, Thomas, and DebBurman was an opportunity that Ganev identified as extremely valuable to his growth as both a student and scholar. “I looked at Northwestern, Loyola, and DePaul, but all those universities didn’t offer personal relationships with professors and all the wonderful research opportunities that the College has to offer. That’s what really drew me here.”

“Lake Forest College has a longstanding record of preparing students for MD/PhD programs, students who have matriculated at medical schools such as at the University California San Diego, Mayo Clinic, Northwestern, Penn State, University of Ottawa, and Loyola,” DebBurman said. “The rigorous scientific curricular preparation, deep and rich research experiences, clinical opportunities in the Chicago area, and careful mentoring by faculty help our students prepare confidently for these very competitive programs.”

Last summer, Ganev presented at a national pharmacology meeting in Chicago and won first place for the undergraduate poster competition. His research began the preceding summer—in 2016—as part of the Richter Scholar program. The research opportunities keep coming for Ganev, and his success reflects his hard work at the College.

Starting this research so early in his undergraduate career gave Ganev a leg up, and continuing his research beyond that demonstrates his dedication and passion for science.

This summer, Ganev is working on his senior thesis in DebBurman’s lab. An extension of the research he presented in San Diego, his research this summer looks at the interactions between different post-translational modifications on alpha-synuclein. Ganev and his lab peers are creating mutations to either mimic or block acetylation and glycation and evaluating their properties to conclude whether these modifications are harmful or protective. “This project is very exciting, as we are among the first labs to actually do this in a living organism, in our case budding yeast,” Ganev said.