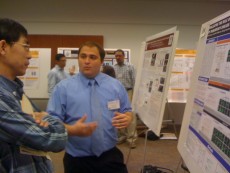 Keith Solvang ‘11 and Pascal Accoh ‘12 won first and third prizes, respectively, for undergraduate research at the Great Lakes Chapter of the American Society of Pharmaceutical and Experimental Therapeutics (GLC-ASPET) meeting held at the University of Chicago Gleacher Center in downtown Chicago on Friday, June 10.

Solvang ‘11 and Accoh ‘12 won first and third prizes at the undergraduate poster competition part of the conference.

Solvang, a recipient of Phi Beta Kappa honors, graduated this spring with a biology major and a minor in chemistry. His undergraduate research has focused on the molecular regulation mechanisms underlying the pathology of Parkinson’s disease in Associate Professor of Biology Dr. Shubhik DebBurman’s lab. His presentation was titled “Evaluation of two post-translational modifications of Parkinson’s disease  protain alpha-synuclein in yeast models.”

This work led to a biology senior thesis and has already contributed to two research articles that are currently in press in peer-reviewed international journals, Parkinson’s Disease and ISRN Neurology. The National Institutes of Health (NIH) funded this work and Solvang specifically received an NIH American Reinvestment and Recovery Act (ARRA) summer research award.

On winning the top undergraduate honor, Solvang said: “The secret to my success at this conference was persistence. You have got to get the mindset of a scientist that experiments are not going to always work the first time. A professor of mine once said, ‘If you cannot take failure, you cannot be a scientist.’ After graduation, I plan on going to medical school. Undergraduate research has helped me in two ways to achieve this goal. First, it has assured me that I want to continue to pursue a graduate degree in the sciences. Secondly, the work that has gone into doing a project such as a senior thesis has given the tools of hard work and constantly thinking outside of the box to be a successful medical scientist.”

A Chicago Public Schools (CPS) Scholar, Accoh is a rising senior majoring in biology, with a minor in neuroscience. He presented undergraduate research that he has been conducting for the past two years at Rosalind Franklin University of Medicine and Science (RFUMS) as a LFC-RFUMS research fellow in Assistant Professor of Pharmacology Dr. Kuei-Yuan Tseng’s research lab. He is currently pursuing his senior thesis in biology on this neuroscience topic, and the title of his presentation was “Periadolescent activation of the CB1 cannabinoid receptor prevents the normative developmental facilitation of parvalbumin-positive interneurons in the prefrontal cortex.” The NIH has also supported his work.

After participating at this conference, Accoh said: “I learned that there are many other people who share the same interest you may be working on. Conferences, such as ASPET, are an excellent place to network with those who are currently employed in research facilities from all over the country. After graduating from Lake Forest College, I would like to prolong my academic career by seeking higher education in the sciences. Doing undergraduate research has helped me to realize there is so much more out there to learn and often, as undergraduate students, we are just scratching the surface of the amazing things that are to be discovered.”

This is the fourth consecutive year that Lake Forest science majors have won prizes at this prestigious scientific meeting competing alongside undergraduates from Indiana, Ohio, Iowa, and Illinois:

2009:
Daryn Cass ‘10, biology and international relations major, won the third prize. She is now a research technician at RFUMS and plans to apply for graduate school in her future.


2008:
Alexandra Ayala ‘09, biology major, won the first prize. She is now a math and science teacher with Teach for America in Houston, Texas, and plans to apply for graduate school.

“Our science students have built an extraordinary and enviable record of accomplishment over the years at regional and international conferences” says Dr. Shubhik DebBurman. “Such sustained success is a strong testimony to the high level of motivation and hard work our students routinely demonstrate towards their scholarship. It also exemplifies our pedagogical approach, which stresses hands-on experiences and articulating communication of it, thereby providing multiple opportunities for students to behave like scientists.”