Lake Forest College / News / The Turing Mechanism: How did the leopard get his spots?

The Turing Mechanism: How did the leopard get his spots? 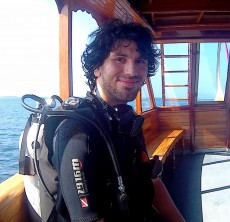 Introduction
It is possible that you are reading those lines on a computer or on one of the various mobile devices that are available today. However, if you read this article in printed form I can ensure you that it is still linked to a computer as this text was written and formatted on a computer as we know it today. Although being much more evolved, today’s computers can be seen as “…incarnations of a Turing machine” (wikipedia source). This brings us to the man about whom this article is about, Alan Mathison Turing. You might say: “I know Touring but how does he fit in the topic of this journal and what is it about the leopard?” Do not worry we are getting to that.
Alan Turing, born in 1912, was an English computer scientist, mathematician, crypt analyst and theoretical biologist. Despite his short and tragic live - prosecution for homosexual activities in 1952. Homosexuality was still a crime in England, following “corrective” hormone therapy and his mysterious death - Alan Turing did not only set the ground stone for the field of computer science, his achievements shaped world history and saved thousands of lives. One of Turing’s best known accomplishments was the breaking of the German cryptography device Enigma during the Second World War. His encryption was therefore a tremendous help in the process of successfully defeating an ongoing war crime regime. A second milestone consisted of Turing’s concepts of algorithms and computations as well as the invention of the Turing machine - the blueprint of an electric computer.
Shortly after the end of the Second World War, Alan Turing joined the Max Newman’s Computing Machine Laboratory at the University of Manchester where he developed a series of stored - program electric computers known as the Manchester computers. During this time, the scientist became interested in the field of Mathematical Biology. After 1950, Turing worked on “… a new mathematical theory of morphogenesis” which was based on the “… consequences of non-linear equations for chemical reaction and diffusion” (Stanford, 2002). Turing was the first to use computers for this type of work and predicted the oscillating chemical reactions such as the Belousov -Zhabotinsky reaction which was discovered a decade later. Turing was fascinated by the fact that identical cells can differentiate into cells with various different forms and functions as well as of the presence of a “plan” for this -morphogenesis. Turing published his findings in a single paper where he stated that his intention is to show that it a combination of physical elements is sufficient to explain biological pattern formation (Kondo and Miura, 2010). His concepts and thoughts have shaped the fields of chemistry as well as of biology. Various scientists have applied Turing’s theory experimentally and were able to reproduce patterns that occur in nature. Turing’s theory is today seen as the “… candidate for explaining a variety of puzzles in biological development, from the spontaneous differentiation of some tissues to the formation of pigmented markings and the patterns of leaves on plant stems” (Ball, 2012). It is, as Shigeru Kondo and Takashi Miura, write “… the best-known theoretical model[s] used to explain self-regulated pattern formation in the developing animal embryo” (Kondo and Miura, 2010).
Turing’s reaction – diffusion model consists of two substances that are diffusible and that interact in order to describe the formation of patterns in an embryo. Turing discovered that such a construct would allow an autonomously generation of spatial patterns. Furthermore, Turing’s model introduces a reaction that creates morphogens (Kondo and Miura, 2010). According to Kondo and Miura, if the process of diffusion is solely at work then “… local sources of morphogens are needed to form the gradient” (Kondo and Miura, 2010). If these morphogens are coding for the creation of pigments the this could be responsible for the markings that can be seen on animals (Maini, 2014).
In mathematical terms Turing’s model can be described as following (Maini, 2004):

where:
C(x,t) is a vector function of chemical concentration depending on time (t) and position (x).
D is the diagonal matrix of diffusion coefficients.
f is the vector of reaction kinetics

According to Philip Ball, the “… proof that animal pigment patterns are indeed Turing patterns would [be] require to identify the morphogens involved.” (Ball, 2012). He furthermore mentions that despite no one has been able to do that until this day there “…are other types of biological pattern for which we do seem to be closing in on the likely biochemical agents underlying the process” (Ball, 2012)
Although Touring most likely did not encounter a free living leopard - certainly not in Manchester - his studies of formation of patterns and appearance in nature also included the spotted pattern of the leopard. In their paper the scientists R. T. Liu, S. S. Liaw and P. K Maini describe their process of generating the spotted pattern of a leopard’s fur based on the parameter tuning of a reconstructing a Turing reaction - diffusion model. The scientists’ state that the pattern of the leopard’s fur changes as the animal growths: the markings change from spots to rosettes (Liu et al., 2006). Figure 1 shows the fur patterns of a leopard at different age stages.

The scientists write that Turing models are mainly used because they are effective models to recreate patterns found on mammals, insects, fish and even bacteria colonies. Although, it is not yet completely clear whether this patterns are results of Turing reaction diffusion processes, there exist evidence about the essential components of Turing models namely the morphogens. Furthermore, studies revealed the occurrence of Turing patterns in Chemistry (Liu, Liaw, Maini, 2006).
Based on phylogenetic analysis that showed that flecks on the fur individuals of Felidae are the primitive pigmentation patterns of more complex patterns including rosettes and blotches that arose from them Liu and his colleagues applied a simple Turing model and were able to generate the fur patterns of leopards at different age stages. In a first step the scientists recreated the spotted pattern as it occurs in young leopards. In a next step, the model was altered: Three parameters were changed. It wwas crucial to change the parameters in sequence to in order to “…to enhance, to shift, and to stabilize spatial modes consistent with the pattern transformation observed during the growth of the animals” (Liu, Liaw, Maini, 2006). Although previous studies demonstrated how Turing models can be used to generate patterns of animals, the study of Liu et al. is one of few that focus of how patterns change during the growth of an individual. With their study Liu et. al. showed that Turing reaction-diffusion models are capable of reproducing temporal spatial patterns that are consistent with those that occur in nature. With that it contributes to the support of the involvement of morphogens in development biology. However, as the scientists write in the end, it is important to note that this is not sufficient to fully prove it. Further research in this direction is necessary to better understand the development of patterns on animals.

Note: Eukaryon is published by undergraduates at Lake Forest College, who are solely responsible for its content. The views expressed in Eukaryon do not necessarily reflect those of the College.