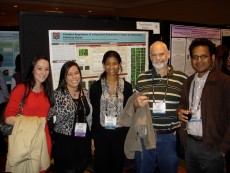 Both students earned SfN awards that financed their travel costs so they could attend the national conference.

Senagolage, a senior from Colombo (Sri Lanka) with a major in biology and minors in neuroscience and chemistry, presented two posters at the conference. Her first poster was on her senior thesis research in biology on the mechanisms underlying the Parkinson’s disease pathology. Her study is titled “Complex Regulation of α-Synuclein Properties in Yeasts by Endocytosis Pathway Genes” is part of a larger body of work she helped to complete as a research manuscript this year as a co-first author.

“It was one of the best experiences of my undergraduate career,” said Senagolage. “I was inspired by many pioneers in the field. It was a group of scientists who were truly passionate about what they are doing and their passion was contagious. There were moments that I would imagine myself in their shoes.”

Senagolage was one of the seven undergraduate students who received an award after a nationwide evaluation of the students’ individual contribution to their research project.

The students were accompanied by neuroscience professors Shubhik DebBurman and Bob Glassman, who also presented their research at the conference.