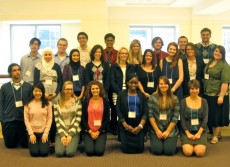 Cole presented her neuroscience thesis research at the conference. She developed a novel technique, along with psychology professor Matt Kelley, to explore whether part-set cues influence object-location memory and procedural memory.  This work has important practical and theoretical implications.  Cole, who defends her thesis this spring, is graduating Phi Beta Kappa after attending the College for only three years. She plans to go on to attend medical school.

“Sydni was simply awesome to work with,” said Professor Kelley. “She really tackled  a tough project, made it her own, and produced an outstanding product.”

Forty Lake Forest College students attended the meeting at Northwestern Memorial Hospital in the city on Thursday, March 29. They were accompanied by Professors Shubhik DebBurman and Bob Glassman. The CSfN hosts the largest Midwest neuroscience meeting every year. It is composed of academic and industry-based scientists who are interested the field of neuroscience.

2011
Madhavi Senagolage ‘12, 2nd Prize, will begin her PhD in Biology at either Northwestern, Wisconsin, or Michigan