Seven in a row 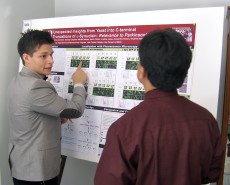 The Lake Forest College record at the Midwest’s premier pharmacology meeting continued unblemished for the seventh straight year. Charles Alvarado ’16 earned the first prize among undergraduates for his Parkinson’s disease research at the 27th Annual Great Lakes Chapter of the American Society of Pharmaceutical and Experimental Therapeutics (GLC-ASPET) meeting held at Rosalind Franklin University of Medicine and Science (RFUMS) on Friday, June 13.

Alvarado ’16, a North Chicago Community High School graduate, chose Lake Forest College for the ease of commuting access and the opportunity to study and research the brain.

Alvarado was initially intent on becoming a doctor, but after he conducted brain outreach with children from local schools his first year, he became inspired to become a high school science teacher and serve his community. To achieve his goals, he added a minor in educational studies to his neuroscience major and plans to pursue a Masters of Arts in Teaching (M.A.T.) degree from the College after graduation.

This is Alvarado’s second year presenting at the GLC-ASPET’s annual conference. Last year, he presented his Richter Scholar research that he conducted in Professor of Biology Dr. Shubhik DebBurman’s Parkinson’s Disease lab. His poster was titled “Unexpected Insights into C-terminal Truncation of Alpha-Synuclein in Yeast: Relevance to Parkinson’s Disease” and was the collaborative effort of a talented undergraduate team that includes five other Richter Scholars: Katrina Campbell ’14, Sarah Chiren ’16, Jyothis James ’16, Maribel Munoz ’16, and Alexandra Roman ’16. They expect to complete this work next year and prepare it for future publication.

Why would a future high school science teacher conduct multiple years of brain research? Alvarado’s motivation is simple: “Research has given me a background and an appreciation for the scientific discovery process. The importance behind this is immeasurable because I will be focusing on imparting knowledge and experience and not performing research when heading into a K-12 teaching career. With more experience with research and science, a more enthusiastic approach can potentially be brought into the classroom.”

He attributes the role of mentors and practice to his professional recognition: “My lab peer mentor Katrina Campbell ’14 and Dr. DebBurman helped me understand the material to a level where I was ready to present it at a conference at this level. Katrina was key to my success because not only did she inform me of the work she was doing in the lab, which I presented at the conference, but she also taught me all of the techniques, so I could speak about the procedures with absolute confidence. The second factor was practice. I practiced with anyone who would listen, including my parents who don’t have a large background in science. A teacher in high school once told me that if you don’t know how to teach someone the material, you don’t know the information well enough.”

Logan Graham ’17 has just completed her first year at the College and is already developing her edge. As a Richter Scholar, she not only enjoyed her first taste of scientific research, but she also got the chance to attend her first scientific conference.

She shares, “Undergraduate research is important because it allows students to explore large questions and work with a team to find ways to solve the problem.”

Fellow Richter Scholar and peer collaborator Peyton Schrag ’17 adds, “The most important thing that I learned from the conference is that experiments must be proven again and again in order for you to draw any kind of conclusions from them. Just because it appears to show one thing at first does not mean that is always true.”

The consistent recognition Lake Forest science students garner year after year at local and national conferences is no fluke. DebBurman emphasizes the length and strength of this record to a shared philosophy among the science faculty.

“We are all deeply motivated to train our students to think and work like scientists,” he said. “Preparing them to excel at presenting their scientific discoveries at professional venues like GLC-ASPET is simply the icing on the cake.”

Maiwase Tembo ’15, biology and neuroscience major, won the First Prize and plans to pursue a PhD in biology/neuroscience in the future.

Katrina Campbell ’14, biology major, won the second prize. She plans to pursue a PhD in biology/neuroscience in the future.

Pascal Accoh ’12, biology and neuroscience major, won the third prize and is pursuing a Masters degree in Public Health at Southern Illinois University.