NeuroFrontiers: A Confluence of role-playing students and alumni 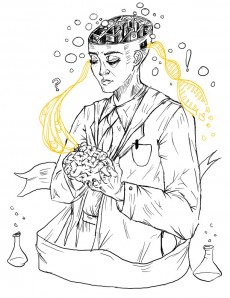 Now in its 14th year, this unique public conference is sponsored by the Biology Department and the Neuroscience Program. I...
April 11, 2015

What is Nu Rho Psi?

Nu Rho Psi is the National Honor Society in Neuroscience, founded in 2006 by the Faculty for Undergraduate Neuroscience. The Lake Forest College Chapter became the 26th member of this national organization in spring 2012.

Eight current neuroscience majors and seven biology and psychology alumni will be inducted as 2015 members of the society at 4:00 PM:

Now in its 14th year, this unique public conference is sponsored by the Biology Department and the Neuroscience Program. It is the non-traditional final exam in advanced neuroscience courses taken by biology, neuroscience and psychology majors their junior or senior year.  On the first day of class, each student was assigned to role-play a world leader in a sub-field of neuroscience. Through the course of the semester, the student researched, read, and synthesized the major papers published by the scientist over his/her scientific career to deeply understand how scientific knowledge accrues over time and how an individual scientist can make important biomedical contributions.  In this process, each student typically read 30-40 articles published over a span 2-3 decades.

During the workshop, each role-playing student becomes the scientist and presents a professional 30-minute seminar on the career length contributions to neuroscience. The student also authors a review article on this topic that is published in the in-house annual NeuroFrontiers journal, now its fourteenth edition.

To make this conference as real as possible, a noted Chicago area neuroscientist is invited to participate in the entire workshop, present his/her own research as the workshop’s Keynote Address, and to facilitate scientific dialogue between each role-playing student as they critically integrate individual scientist seminars into the broader context of understanding the complex relationship between brain, mind and behavior and the current challenges and the future of biomedicine.

Over 140 students have participated in this workshop since 1998, with more than a hundred of them headed for or already pursuing careers in biomedicine.

KEYNOTE LECTURE - 4:20 PM
Dr. Marina Wolf, Chair and Professor of Neuroscience at Rosalind Franklin University of Medicine and Science (RFUMS), will deliver the keynote address. Dr. Wolf received her Ph.D. in Pharmacology in 1986 from Yale University. From 1987-1990, she trained as a Postdoctoral Fellow at the Center for Cell Biology at Sinai Hospital of Detroit.  Dr. Wolf was Assistant Professor of Psychiatry at Wayne State University until moving in 1992 to the Chicago Medical School at Rosalind Franklin University of Medicine and Science.  Dr. Wolf’s research on the role of neuronal plasticity in drug addiction has been supported by the National Institute on Drug Abuse (NIDA) since 1992. She presently serves a regular member of an NIH study section and a member of the NIDA Board of Scientific Counselors. Other honors include Phi Beta Kappa, predoctoral and postdoctoral fellowships from NSF, PMAF and NIH, and election as a fellow of the American College of Neuropsychopharmacology. She is Associate Editor for the Journal of Neuroscience.