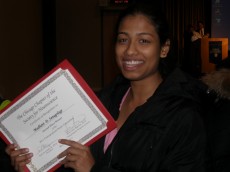 Senagolage presented this work at the undergraduate symposium and competition of the annual meeting of the Chicago Chapter of the Society for Neuroscience (CSFN) at Depaul University.

A biology major, Senagolage presented research that she been conducting since her sophomore year and which will lead to her senior thesis in Associate Professor of Biology Dr. Shubhik DebBurman’s molecular neuroscience lab at Lake Forest College. Her contributions completed a long-term five-year collaboration on Parkinson’s disease that included Jaime Perez ‘10, Alexandra Ayala ‘09, Mithaq Vahedi ‘08, and Jessica Price ‘06. Senagolage plans to pursue a PhD in biology after graduation.

“I was surprised to see how many undergraduates were at the meeting presenting their work, which was at first a little intimidating. However, having good background knowledge and also thinking about other aspects of my research prepared me to be a competitive presenter ,” says Senagaolage. “Previous experiences at other conferences made me confident in front of the judges and the professionalism required in the scientific field. Having breakfast with the keynote speaker and discussing my future goals was one of the many exciting experiences. Overall, the Chicago Society of Neuroscience conference motivated me to enhance my scientific interests at an early stage as an undergraduate.”

The CSFN is the Chicago affiliate of the National Chapter of the Society for Neuroscience and is the largest annual Midwest neuroscience meeting. It is composed of academic and industry-based scientists who are interested the field of neuroscience. This includes researchers, teachers, students and interested public. Undergraduate scholars of neuroscience from colleges and universities in Illinois, Indiana, Michigan, Iowa, Ohio and Wisconsin typically present at this prestigious regional conference, alongside about 300 hundred scientists, post-doctoral fellows, and graduate students.

Five other Lake Forest College students majoring in neuroscience, biology or psychology, also presented posters at the conference, alongside 30 other undergraduate presenters from across the Midwest:

First-year student Paula Firmiss ‘14 states: “As a first-year student attending the conference, I really did not know what to expect, and I was slightly afraid that I might not understand a lot of the lectures. However, after the entire day I was so mesmerized by all of the issues that the scientists were dealing with that I developed a new passion for neurology and really see this field as a possible career for my future.”

Adds psychology junior Mira Trebilcock: “The conference provides young undergraduates the opportunity to explore the diversity within the growing field of neuroscience. The variety of work and research presented throughout the day is a great example of the many  advances  being made and the different paths within the field itself. As a junior, the conference illustrates a variety of research opportunities available upon graduation, and continuing throughout professional careers.”

A nine-year legacy of undergraduate accomplishment

Lake Forest biology students have won one or more prizes each year for the past nine years of this undergraduate neuroscience research competition in Chicago. The thirteen award winners to date (see list below) have either pursued M.D., D.V.M., Ph.D., or M.D./Ph.D. degrees, or are employed in biomedical research or in K-12 teaching.

“Our science students have built an extraordinary and enviable record of accomplishment over the years at this conference and at others,” says neuroscience program chair and Associate Professor of Biology Shubhik DebBurman. “Such sustained success is a strong testimony to the high level of motivation and hard work our students routinely demonstrate towards their scholarship. It also exemplifies our pedagogical approach, which stresses hands-on experiences and articulating communication of it, thereby providing multiple opportunities for students to behave like scientists.”

Derek Atchley ‘10, 3rd Prize, will begin his PhD in cognitive and behavioral neuroscience at Wayne State University in Fall 2011.