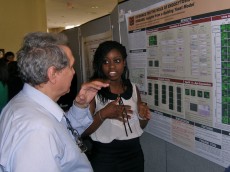 Wase Tembo ’15 earned first prize among undergraduates for her Parkinson’s disease research at the 26th Annual Great Lakes Chapter of the American Society of Pharmaceutical and Experimental Therapeutics meeting at Rush University Medical Center on Friday, June 14. She joins a growing list of Foresters recognized at the event for their impressive poster presentations over the past six years.

The Nairobi, Kenya native with plans to study abroad in New Zealand this fall is researching whether the protein linked to Parkinson’s disease, alpha-synuclein, uses endocytosis as a pathway for degradation.

Tembo said the judges who visited her two-hour-long poster presentation seemed most impressed that her research began so early in her undergraduate education — the summer after her first year at Lake Forest College. Professor of Biology Shubhik DebBurman invited her to join his lab at that time, and she has been hooked ever since.

“I didn’t think I’d like research as much as I do,” she said. “It grows on you. It becomes an addiction. You want to see results, so you find yourself coming in at odd hours just to get it done.”

She succeeds a 2010 and a 2012 alumnus in this research, which she hopes to publish. Together, they have identified a endocytosis gene (Vps28) that is key to this regulation.

Tembo said she enjoyed attending the meeting and especially the lunch, when she had an opportunity to sit and talk with professionals in her field of interest, such as company representatives and professors from other colleges and universities in the region. Last year, she remembers sitting next to an employee from Abbott Laboratories.

Katrina Campbell ’14, biology major, won the second prize and plans to pursue a PhD in biology/neuroscience in the future.

Pascal Accoh ’12, biology and neuroscience major, won the third prize and is pursuing a Masters degree in Public Health at Southern Illinois University.