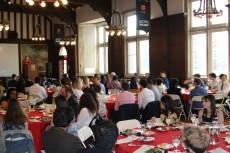 Students and faculty enjoy the leadership awards.
May 15, 2018

Students and faculty gathered to honor exceptional students for their accomplishments at the annual Student Leadership Awards in the Calvin Durand Lounge on April 30.

At the ceremony, the following awards were presented: