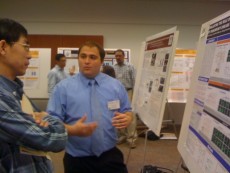 Keith Solvang '11 received the first prize for Parkinson's disease research presented at the Great Lakes Chapter of the Am...
July 07, 2011

“These yeast studies extend our understanding of serine phosphorylation and alanine-76 contributions to α-synuclein aggregation and are the first to detail their impact on α-synuclein’s plasma membrane and endomembrane association,” reads the abstract.

The students combined their senior theses research and comprised the two manuscripts. All eight students have presented their research in at least one national meeting, including two Gordon Research Conferences, and they all won either first or second prize. The research has been funded by national grants, including support from the American Recovery Reinvestment Act Funds. Six of the eight students have gone on to pursue their MDs and PhDs.