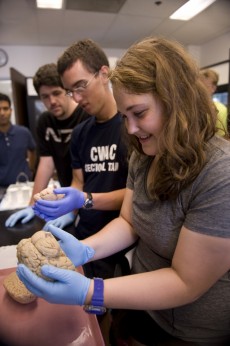 Students in the first-year studies class Medical Mysteries of the Mind recently traveled to Northwestern Medical School’s Cognitive Neurology and Alzheimer’s Disease Center, where they spoke with Forester alumni who work or study there and learned about human brain pathology at the school’s Brain Bank.

Joining the group were Dr. Jason Pitt, a postdoctoral fellow at Northwestern Medical School and adjunct faculty member in the College’s biology department teaching neuroscience courses, and alumni Lokesh Kukreja ’08 and Stephanie Valtierra ’08, who are completing their PhDs at Northwestern in neuroscience.

Earl Barnes ’86, Vice President and General Counsel at Northwestern Memorial Hospital, hosted the Lake Forest students for lunch, and Kristina Hedley ’92, director of special affairs, and Lisa Azu-Popow ’92, program manager, were among the party, too.

Professor of Biology and Neuroscience Program Chair Shubhik DebBurman is the instructor of the first-year studies course.

Below are students’ responses to the question: What is the most important way that visiting these scientists and doctors affected you?

1. Visiting with the Northwestern Scientific Group increased my understanding of the nature of neurodegenerative diseases, primarily Alzheimer’s. The experiences provided by the scientists there gave us an insight to the potential research that we will be doing in this class.

2. Visiting Northwestern Science Group left me thriving to learn and even argue a topic because without differing opinions, new opinions would not arise. Yes, having a human brain in my hand for the first time was definitely an impressive moment in my life, but I wanted to know more about what was within the folds and crevices of the brain. The men and women working there are continuously looking for something else to examine within the brain, not letting an obstacle deter them from pursuing research. Simply put, I gained the concept that everything is not sitting in plain view; in order to go somewhere, one must be brave enough to venture further, argue their opinion, and remain passionate about what they are involved with.

3. The Northwestern medical center has caused a spark of interest into the field of neuroscience. Watching the doctors take samples of the human brain and examine it was very interesting to watch, and even more so to participate through looking at samples in the microscopes. The significance of the visit was also through the value of learning new things about myself and others while viewing the brain.

4. For me, just seeing that research is actually happening was very important to me. It’s one thing to hear about an event happening, but once you experience for yourself, you can truly believe it. Now that I’ve experienced research and their respective researchers, I feel that a cure or treatment for Alzheimer’s is much closer than I previously thought. Before the visit I had doubts that maybe some of the information I had read might only have been hopeful treatments that hadn’t actually been tested. Now I feel comfortable in knowing that the research is happening and that scientists are taking this issue seriously.

5. The visit affected me most by just showing me how passionate some of these scientist were. They really enjoyed learning about the disease and sharing their knowledge with us. I’ve heard stories of how Alzheimer’s disease has affected many families to the point where they cannot be around their loved ones because they no longer remember who they are. Finding a cure or even just treatments to lessen the affect and slow down the progression of this disease is something that is greatly needed and something that these researchers are truly passionate about.

6. The visit to Northwestern showed me the possibilities that my intended major holds in the area of research. The alumni from Lake Forest College excited me about my future and determined me to reach the level of success they have achieved. Besides being incredibly motivating, the experience was also very educational. My peers and I were introduced to neurodegenerative diseases that we have not yet learned about. It was also very interesting to see Dr. Pitt’s alternative perspective on the causative factors of Alzheimer’s disease. Overall, the most important effect the visit had on me was to motivate me to strive for success and excite me of the possibilities neuroscience holds.

7. I believe that the most important way that visiting these scientists and doctors affected me was that I took this Chicago Experience to heart. Many of my family members have been affected by Alzheimer’s disease, so there is a very likely chance that I will also experience the devastating effects of Alzheimer’s. Knowing that these scientists are so devoted to their work and really shows that there is hope for the future. Taking insulin is said to have prevent and/or cure Alzheimer’s, and there are many more treatment options along the way. These scientists are trying to narrow down the source of the disease which helps to continue finding cures and treatments in future advancements.

8. This experience has given me a better understanding of Alzheimer’s disease. Being able to see actual brains of patients affected and microscopic slides of brain tissue gave me a better idea of how this disease looks like and how it works. I also learned more possible treatments and a more specific analysis of what happens in the brain as the disease begins to settle in. I enjoyed this experience due to the visual components to help me better understand this notorious disease.

9. The most important thing that I took away from this trip was that there are always scientific advances that contradict previous findings. Dr. Pitt’s idea that amyloid plaques were not directly involved in causing Alzheimer’s forced me to reevaluate what I had learned and compare the opposing viewpoints in order to try to understand which one would more likely be the real cause.

10. What struck me most was the precision involved in the field. Things I first thought to be minor such as wider gaps in the brain tissue turn out to be the distinguishing characteristics of Alzheimer’s disease. I just found it very interesting that these scientists could look at a brain tissue or a microscope slide, and instantly know what was important, and what was not.

11. Visiting these scientists affected me by getting an actual up-close look at diseased brain samples compared to healthy cognitive brains. Its a much different and more realistic feel seeing it in person and gives a much better understanding of the disease.

12. After visiting Northwestern University, I feel that this experience affected me the most both personally and intellectually. When I was younger, my grandfather died from Alzheimer’s disease and back then, I had no idea what this disease was, nor did I understand the biology of it. After reading the summer articles and listening to the discussions on Chicago day, I feel like I discovered closure learning more about the disease my grandfather had and a new found understanding.

13. Visiting these scientists affected me by getting an actual up-close look at the diseased brain samples compared to healthy cognitive brains. It is a much different and more realistic feel seeing it in person and gives a much better understanding of the disease.

14. Visiting the brain bank and viewing the microscope slides of patients that had Alzheimer’s disease affected me the most. To see a healthy brain next to a diseased brain, the differences were striking. Compared to the healthy brain, which was able to hold together, the diseased brain was weak and had large holes in it. Also, viewing the microscope slides of Alzheimer’s patients, I was able to see the beta-amyloid plaques. I was also able to see the neurons and their nuclei. In a diseased slide, plaques filled up the slide, visually showing what happened to that patient.

15. From the visit to the Northwestern University, the most important thing what I came to know was that the way you think and the activation of your brain plays the most important role in Alzheimer’s disease. If your mind is not activated properly then the β amyloid gets produced. But if your mind overthinks and is not getting any rest or is active for wrong reason or if wrong part is activated the over stimulation of brain would cause the cells to die. Another point made by the professor during presentation was how plaques and tangles have little effect in initiating disease. The AD dementia is causes by synapse loss and the synapse loss is causes by the oligomers. I found out about the differences between the brain of Alzheimer’s and normal human brain and most important thing is that I learned to think and activate my brain for important things and not to let it produce the β amyloid.

16. After visiting the amazing staff at Northwestern, I feel extremely lucky. Not everyone gets to see human brains in their first year of college. I got to learn more about current AD treatments which I would have to hear in a lecture hall at any other school. After this trip I am so excited for the rest of the year, and cannot wait to do all the labs this year.﻿