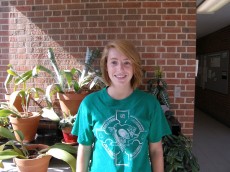 Erika Alto ‘13 is a sophomore from Lindenhurst, Illinois, majoring in neuroscience and biology.
February 28, 2011

Dendrobatids include some of the most toxic animals known on Earth. They are alkaloid-containing amphibians that sequester their alkaloids through the consumption of small arthropods and insects. Until recently, it was unknown how the dendrobatids were able to sequester alkaloids in their serous glands, and two hypotheses were developed to explain this phenomenon. Biosynthesis of the alkaloids by poison dart frogs and other dendrobatids themselves, was the most obvious explanation. However, the biosynthetic hypothesis quickly gave way to the dietary hypothesis following numerous, parallel experiment results5. These results indicate that dendrobatids only present alkaloids if they consume alkaloid-containing arthropods and insects. Although many scientists accept the dietary hypothesis, there are still many questions regarding dendrobatids and alkaloids alike. What is the typical diet of dendrobatids? Do different arthropods or different insects contain different alkaloids? Are there various types and structures of these alkaloids? These questions are important in determining if diet actually affects the chemical defense and toxicity of poison dart frogs. Whether or not diet affects toxicity is an on-going question regarding other amphibians such as the Andean frog (Ranitomeya virolinensis) and the European fire salamander (Salamandra salamandra). In this paper, the most significant findings and studies that support the dietary hypothesis will be reviewed in work done on poison dart frogs.

Poison dart frogs are well-known for their brilliantly colored bodies and ability to deter predators. Their elaborate designs and bright body hues are deliberately boastful in order to ward off potential predators, a ploy known as aposematic coloration3. All poison dart frogs carry venom that is considered lethal to human beings and other mammals. Poison dart frogs can be found in a variety of habitats, ranging from the tropical forests of Costa Rica to Brazil and other parts of South America3. The most dangerous species of poison dart frogs is the golden poison arrow frog (Phyllobates terribilis). This frog secretes a poison known as Batrachotoxin. This Batrachotoxin is severely detrimental to humans and mammals due to its ability to interrupt the nervous system4. Poison dart frogs are carnivores and feed mostly on spiders and other small insects including ants and termites that they see on the forest floor. They are able to capture the prey rather quickly by using their long, sticky tongues4.

To fully understand how the diet affects the chemical defense of the poison dart frog, the actual acquisition of the toxic substances needs to be further elaborated on. The  acquirement of toxic substances is considered to be exogenous. It means that the substances are produced from another organism, in this case arthropods or insects, and then sequestered by the poison dart frogs. Their defensive skin alkaloids have an exogenous source: a diet of small, alkaloid containing arthropods, mites, ants, and other insects1. Therefore, there is a significant correlation between the dietary specialization of the poison dart frogs and their alkaloid profiles.

It was first thought that biosynthesis was responsible for the present alkaloids of the poison dart frogs.  The fact that the captive frogs’ quantity of alkaloids decreased over their time in captivity, supports the fact that the poison dart frogs do not manufacture their own alkaloids5.  This decline in alkaloid quantity was first related to stress, but further investigation found that it was indeed a diet containing toxic arthropods that provided the alkaloids to the poison dart frogs. When experiments were originally designed to examine biosynthesis, it was seen that dendrobatids appeared to slowly lose alkaloids, while in captivity, and that captive-bred dendrobatids did not even have alkaloids. In addition, offspring of wild-caught Hawaiian frogs that were raised indoors on a diet of crickets and fruit flies were alkaloid-free. On the other hand, offspring raised outdoors and fed mainly wild-caught termites and fruit flies contained alkaloids similar to their wild-caught parents5. These compelling facts made researchers turn to the dietary hypothesis as the source of alkaloids for poison dart frogs5.

The dietary hypothesis states that dendrobatids obtain alkaloids through consumption, of arthropods and other small insects that ingest plant toxins. The dendrobatids actually acquire these alkaloids through a process known as sequestration. Although sequestration has been very effective and efficient for poison dart frogs, sequestration of preexisting toxins is not necessarily simpler than endogenous methods. It is possible that organisms that rely on sequestration, including poison dart frogs, may begin to rely on diet as a means of defense. Organisms that use sequestration as a means of attaining alkaloids, also need to develop detoxification mechanisms to assure proper alkaloid retention1. A correlation has also been seen between aposematic dendrobatids and a more specialized diet that has a higher percentage of ants than other, less aposematic dendrobatids. These aposematic dendrobatids contain a more diverse range of lipophilic alkaloids and this most likely is a direct result of a diet consisting mainly of varying ant species1.

Amphibian skin has two different kinds of glands that are considered poisonous: mucous glands and serous glands. While both glands aid in alkaloid sequestration, it has been suggested that the serous glands among amphibians play  the main role. It was traditionally thought that the serous glands were too primitive for poison synthesis, and therefore, they were co-opted for storage of sequestered compounds and toxin production1.  However, more investigation proves to leave this thought, because the actual process of sequestration is still not fully understood. These skin-sequestered alkaloids appear to be peripherally distributed and bitter tasting. Such adaptations  have been linked to the evolution of aposematism because the predators are able to sample the frog tissue without actually afflicting injury  to the poison dart frogs1.

The diet of poison dart frogs can be narrow or broad. This means that a poison dart frog can have a more narrow diet consisting mainly of ants, or a more broad diet consisting of ants, and other alkaloid-rich arthropods1. Thus, the typical diet of poison dart frogs consists of ants, mites, and many other small arthropods. The arthropods ingest various plant toxins through the consumption of leaf litter on the forest floor, and these plant toxins remain in their bodies until the poison dart frogs digest them.  Furthermore, more investigation has been done to establish a connection between distinct alkaloids and arthropods. It was found that six of the twenty-eight structural classes of alkaloids come from myrmicine ants. Other alkaloid classes have been noted to come from coccinellid beetles, millipedes, and even formicine ants7.

More than eight hundred different alkaloids have been discovered, but the most crucial alkaloid is Batrachotoxin. Batrachotoxin’s (BTXs) are the most toxic, steroidal alkaloid found in the skins of poison dart frogs. The source of the BTXs has been found to be sequestered from the diet of the poison dart frogs. This implies that dietary specialization plays a primary  role in the ingestion of BTXs, as well as other ingested alkaloids in poison dart frogs2. BTXs are very harmful to humans and other mammals because they function by locking open the sodium-ion channels of nerves and muscles. This sodium-ion channel disturbance inside the mammalian nerve cells leads to an irreversible depolarization due to a flood of sodium ions. There is a false batrachotoxin known as BTX-A, which is evident in captive raised poison dart frogs. These captive raised frogs are capable of incorporating BTX-A into their skins, but they are not able to create or convert to the natural BTX. This is because the captive raised frogs are fed a different diet than that of a wild poison dart frog.   They begin to eat captive breed ants and arthropods, which lack the organic plant toxins naturally gained in the wild. This evidence strengthens the link between a diet of arthropods and the sequestration of alkaloids into the frog skin glands2.

Sequestration of alkaloids also varies among frog populations. For example, frogs collected from varying areas of South America that had ingested termites or fruit flies, had different alkaloid content than frogs that ate primarily ants and beetles. These alkaloids contained trail-markers from various arthropod species, which again, provides evidence that poison dart frogs’ poison is based on dietary components, such as the species of consumed arthropod.  Alkaloids found in M. Stelzneri included trail-markers from the Pharaoh’s ant, the thief ant, and the fire ant, therefore giving that frog traces of varying alkaloids including monomorine and propylindolizidine5. Individual sampling of arthropods from areas where poison frogs live or visit may result in the identification of potential new alkaloids, as well as, potential alkaloid sources5.

In conclusion, the diet of a poison dart frog does affect its chemical defense, or toxicity. The various arthropods and insects that the poison dart frogs consume each contain different alkaloids, thus giving the frogs various alkaloids. Captive-breed poison dart frogs do not sequester or even show traces of alkaloids due to an inorganic diet consisting of crickets and fruit flies. However, wild caught offspring that are raised outside and fed a diet consisting of wild-caught termites and fruit flies will contain alkaloids. Although many experiments and great amounts of evidence support the dietary hypothesis, there are still gaps in knowledge and unanswered questions relating to the diet of poison dart frogs. No definitive barrier between biosynthesis and the original dietary hypothesis has been established. The questions that remain unanswered include, (1) are there other frog species that are able to sequester alkaloids from diet besides the dendrobatids?, (2) what are the arthropod sources for the hundreds of unidentified alkaloids in arthropods?, and (3) what is the mechanism by which frogs take up alkaloids for storage in their skin glands?5.Therefore, it is necessary to continue research, as well as, discover and describe new alkaloids and their sources.