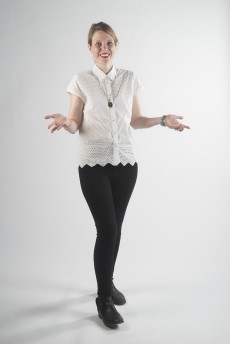 Following her presentation at Brain Awareness Week, Assistant Professor of Theater Chloe Johnston sat down with Spectrum to discuss Aristotle, mirror neurons, and the importance of an interdisciplinary approach to education.

Q: How did you come to be interested in neuroscience?

A: I’ve always been excited about the way that theater gives back to society as a whole, and I think that some of the intersections of theater and neuroscience point to ways in which theater has a function in society that is more than just entertainment. I dipped my toes into neuroscience research as part of my dissertation, and it turns out that there are a lot of theater theorists who are very excited about neuroscience because it appears to provide scientific basis for a lot of things that we have observed in theater for thousands of years, going back to Aristotle. Aristotle describes how theater is important in our lives because seeing ourselves reflected on stage teaches us how to be human, and now we have mirror neurons that seem to explain the same phenomenon: that we identify with what we see in front of us.

I have also done a couple of theater projects that were inspired by neuroscience concepts. I co-founded a theater company called the Laboratory for the Development of Substitute Materials, and we were interested in looking at scientific concepts on stage, so we did a show that was about phantom limbs. I’ve also done a show about mirror neurons. There’s a lot of really exciting research being done on things like the intersection of theater and autism or theater and dementia. I gave a talk on some of these ideas at Brain Awareness Week in 2013, and that’s what led me to proposing a new theater and neuroscience course: The Mind on Stage.

Q: Tell me about The Mind on Stage.

A: The class is roughly divided into three sections. In the first, we look at what theater theorists are writing about in terms of their use of neuroscience. The second is specifically about different depictions of neuroscience on stage, so we read plays from King Lear, which is in part a play about dementia, through Next to Normal, a prize-winning musical about bipolar disorder. In the last section, students create their own performances that illuminate a neuroscience concept. They tend to be immersive performance experiences—performances in which the audience really participates.

Q: What do you think is the benefit of exploring the intersection between the sciences and the humanities?

A: In terms of how it benefits neuroscience students, I think it allows them to bring an emotional component to their work and not just think about these problems from a research standpoint but from the lived experience of them. And I also think that if you’re passionately studying the brain, you want to be able to communicate your research to as many people as possible, so you should look at other tools that you have to do that besides writing a scientific journal article. For the theater students, it’s about looking at the different applications of the skills that you have, which are essentially communicative skills, like helping people to understand an idea better. So I like the idea that we’re looking at theater in more than just an entertainment context. But I really do believe that it is a symbiotic relationship; it allows the science and humanities students to discover what they have to give to one another.

Q: What else is the theater department up to?

A: Theater is a place for students of all different interests and backgrounds, and something that we are really committed to is being part of campus life at large. We have classes like The Mind on Stage, which is appealing to neuroscience students, or Shakespeare and Film, which is appealing to film students, and we did a project last year in partnership with UBA that’s about getting students’ stories out to a wider audience. Students can be involved in our productions, take our classes, or become a theater major. The skills that we teach in this department are useful to people across the board. We are just looking to be a dynamic part of campus in a really widespread way. We’re not just about doing Shakespeare—although we do love Shakespeare.