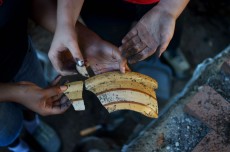 An artifact from the Charnley-Persky House.
October 27, 2015

In preparation for the Midwest Historical Archaeology Conference presentation, Anne Marie and Xhris, who took part in the summertime dig, studied artifacts, including such things as cans, bottles, ceramics, small boxes, and even oyster shells and other food remains, through the lens of socioeconomic status of those who lived in or near the home during the late 19th-century. Through their analysis, they found the artifacts raise more questions than they answered.

“We decided that ideas of class are harder to decipher [than originally expected], especially because the Charnleys and other residents of the house had servants that were also handling the artifacts and, during this time period, also were trying to create/buy items that made it seem like they were wealthy and in a higher socioeconomic class,” the students explained.

“Attending the conference was a great experience for me and it allowed me to recognize what the field of archaeology is like at a professional level—rather than solely as a student,” said Anne Marie.

The Charnley-Persky project is funded by Digital Chicago, a grant from the Mellon Foundation.