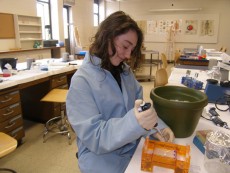 Alexandra Roman ’16 is a senior from Mundelein (Illinois) pursuing a major in neuroscience, with minors in chemistry and music. Roman is conducting her senior thesis in neuroscience under the mentorship of Professor of Biology Dr. Shubhik DebBurman, whose lab investigates the molecular basis of Parkinson’s disease. Roman first began conducting research on this topic as a First-Year Richter Scholar. She is planning for a career in medicine after graduation.

Roman received the Nu Rho Psi grant for her proposed senior thesis project to evaluate whether a chemical modification called sumoylation confers protection to the Parkinson’s disease protein alpha-synuclein and reduces its ability to be pathogenic. The novelty of Roman’s approach is that she is using a simple unicellular fungus (budding yeast) as her model system but combining cell biology, molecular genetics, and biochemical techniques to get insight into a complex medical problem.  Roman’s success in receiving this award was partly because she already had preliminary data to support her proposed experiments. Early this spring, she won a poster prize at the 2015 Chicago Neuroscience meeting for presenting this data.

Roman will be formally recognized the Nu Rho Psi national meeting that will be held as part of the international 2015 Society for Neuroscience (SfN) meeting in Chicago (Illinois) from October 17-21. She will also present her senior thesis progress at this venue, which attracts over 40,000 neuroscientists from across the globe.

Nu Rho Psi is the National Honor Society in Neuroscience, founded in 2006 by the Faculty for Undergraduate Neuroscience.  Lake Forest College received its Nu Rho Psi charter in 2012 and its chapter was awarded the National Chapter-of-the-Year in 2014. Roman was inducted into Nu Rho Psi in 2013 and is currently serving as the Chapter President.

Roman is the latest student honoree in a long string of biology and neuroscience students that have received awards in the past decade at the national level for their undergraduate research, from prestigious scientific organizations that include the National Institutes of Health, American Society of Cell Biology, American Society of Biochemistry and Molecular Biology, Society for Developmental Biology, Gordon Research Conferences, Council of Undergraduate Research, Society for Neuroscience, and Parkinson Disease Foundation.

Given this length and strength of student success, Dr. DebBurman reflects, “There are outstanding reasons why our students consistently stand out in the local and national stage for their scientific achievements, whether garnering honors for presentations at national conferences or by authoring award-winning grant applications like this one. Our life sciences curriculum introduces a research-focused scholarly mindset early in students. We keep honing a wide array of professional skills over and over again throughout the four years that students spend with us”.

Roman adds: “I believe the reason my grant application stood out is because of how uncharted the questions I’m studying are. No one else has come out with data evaluating sumoylation in conjugation with all these different variants and modifications of alpha-synuclein. By answering these basic mechanistic questions, I’m adding a piece to the Parkinson’s disease puzzle, which is hopefully getting closer to finding a cure.  Personally, I’m honored that others are demonstrating the same excitement I have about my work. I’m also happy that my lab is being highlighted to a national audience, and gaining recognition for the hard work we do and the excellence we strive for.”

The Nu Rho Psi Undergraduate Research Grants support high quality research projects conducted by undergraduate student members of Nu Rho Psi by defraying direct research costs.The society supports no more than four awards nationally in a calendar year. The Awards Committee evaluates applications according to the following criteria: scientific merit, clarity and sophistication of expression in writing, and likelihood that proposed activities will be completed by the Project Summary deadline.