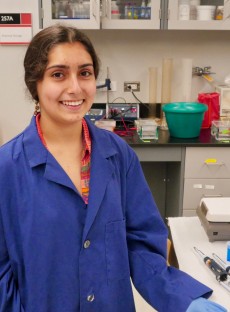 Balaram took first place in undergraduate poster competition at the 31st Annual Meeting of the Great Lakes Chapter of the American Society of Pharmaceutical and Experimental Therapeutics (GLC-ASPET) held at the Loyola University Stritch School of Medicine in Chicago on June 22, 2018.

This is the College’s eleventh consecutive year of having science majors earn honors at the GLC-ASPET meeting. Balaram’s success mark the third time within the past decade that Foresters brought home first place.

Earlier this year, Balaram earned a grant from the National Council of the Nu Rho Psi neuroscience honors society that supports her current research about possible interactions between certain genes associated with Parkinson’s Disease and alpha-synuclein, a prominent protein that misfolds in the disease, and is thought to cause the neuronal degeneration that drives Parkinson’s.

“Undergraduate research teaches you many skills that help you grasp and apply science in its truest form,” Balaram said. “These skills include designing and conducting experiments, troubleshooting when those fail, gathering knowledge about the literature, working as a team and optimizing your resources. Even if I wasn’t looking to do research post-graduation, it would still be an extremely valuable experience to have.”

Balaram got to show off her hard work at this year’s GLC-ASPET chapter meeting, titled “Advances in Cardiovascular Pharmacology,” which highlighted major advances in the pharmacological understanding and treatment of cardiovascular diseases. GLC-ASPET is known as the premier pharmacology gathering in the midwest region.

The science programs at Lake Forest College give students unique opportunities to display their hard work on both a regional and national scale. “Many colleagues at the meeting mentioned to me that our students simply stand out for poise, confidence, professionalism, and engagement,” DebBurman said.

“Presenting at GLC-ASPET was amazing! It took a lot of work, but it really paid off in the end,” Balaram said. “I had to prepare quite a bit to be able to present my research to professionals working in biology and to be able to take any questions they might have, but it was a valuable experience.”

All this research is building Balaram’s resumé, as she looks forward to pursuing a career in scientific research. “As it turns out, I loved all my research experience thus far so much that I want to pursue it as a career,” she said. “I really want to work with single cells and look at cellular processes, so Dr. D’s lab was the perfect place for me to start my scientific career.”

Yoan Ganev ’19, neuroscience and chemistry major, won the First Prize and is conducting his senior thesis research on this project. He was funded by a national grant from the Parkinson Foundation-American Parkinson Disease Association for this work. He is planning to apply for MD/PhD programs after graduating from the College.

Chisomo Mwale ’19, neuroscience major, won the Second Prize and is conducting her senior thesis research this upcoming year with the plan to apply for post-graduat studies.

Emily Ong ’17, neuroscience major, co-won the Second Prize. She received the college’s 2017 Phi Beta KappaSenior Thesis Award for this work and was funded by a national grant from the Parkinson Disease Foundation. She is appying to medical school this year.

Rosemary Thomas ’18, biology and neuroscience major, also co-won the Second Prize and completed her senior thesis research with distinction this year. She is planning to apply for medical school after a gap year.

Rachel Granberg ’16, biology major, won the Third Prize for work she conducted at RFUMS and is pursuing MD studies at Thomas Jefferson University.

Charles Alvarado ’16, neuroscience and education major, won the First Prize and has obtained a Masters of Art in Teaching (M.A.T.) degree from Lake Forest College in 2017. he is currently a Behavioral therapist in the Chicago north shore.

Katrina Campbell ’14, biology major, won the Second Prize. She completed an NIH IRTA Fellow at the NIH-NIAID Rocky Mountain labs from 2014-16 and is now pursuing her PhD studies in Neuroscience at Northwestern University.

Keith Solvang ’11, biology major, won the First Prize and received his Masters and M.D. degrees from Rosalind Franklin University of Medicine and Science.

Pascal Accoh ’12, biology and neuroscience major, won the Third Prize and received his M.D. degree at Southern Illinois University. He is doing his residency at Saint Louis University.

Alina Konnikova ’11, biology major, won the First Prize and received her M.D. degree from the University of Illinois Chicago Medical School.  She is conducting her residency at the Medical College of Wisconsin.

Natalie Simak ’11, biology and psychology major, won the Third Prize and received her M.D. from Rosalind Franklin University of Medicine and Science.   She is conducting her residency at the University of Chicago.

Alexandra Ayala ’09, biology major, won the First Prize. She is now a math and science teacher with Teach for America in Houston, Texas.