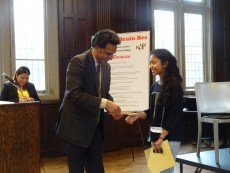 On February 11, Vidya Babu, a junior from Illinois Math and Science Academy, became the First Place winner of the 2017 Chicago Brain Bee that took place at Lake Forest College. She will represent the Chicago region at the USA World Bee on March 17 (2017) in Washington, D.C.

2017 indeed proved that the third time was the lucky charm for champion Vidya Babu, who had participated in the Bee the past two years, placing Third at last-year’s competition.

The Chicago Brain Bee is a competition for area high school students that tests their knowledge in neuroscience including such topics as cells of the nervous system and how they communicate with one another, neuroanatomy, brain-behavior relationships (e.g. the neural basis of learning and memory, emotion, stress, sleep) and neurological diseases. It helps motivate our youth to learn about the brain, capture their imagination for the sciences, and inspire them to pursue careers in biomedical research.

Every year more than fifty local Brain Bees are held throughout the United States in a search for the “best brain”. The winners of the locals are invited to participate in the USA National Brain Bee. This competition has been so exciting that it has expanded to many other countries and the winner of each national then compete in the World Brain Bee.

The Chicago competition is one of the oldest regional Brain Bees and the Chicago Chapter for the Society for Neuroscience sponsors it each year.  This year schools from Chicago area were joined by those from Indiana and Wisconsin. In two of the past three years, the Chicago Champion has ranked in the Top Five nationally.

This year’s Bee was held on Saturday, February 11, 2017 at Lake Forest College (Lake Forest, Illinois). Over sixty students, ranging from freshmen to seniors, from twenty Chicago area high schools participated. For some, it was their first time, but for several others, it was their second, third, or even their final fourth time.

To make it through to the final round, the finalists had to plough and survive 35 questions that included these: What is the function of Netrin in the brain? How does the toxin MPTP damage our brain? They then competed in the Final Bee, which is styled after the Spelling Bees, where one by one students were eliminated till only the winner remained on stage.

After participating in Chicago Brain Bee three times, Vidya shared, “I was thrilled when I finally won and all my hard work paid off. I have been fascinated by neuroscience from the age of eight when I first saw a neurologist explain brain freezes on a children’s TV show. When I first heard about the Bee, I knew I wanted to participate and learn as much as I could. In the future, I hope to pursue a degree in neuroscience and continue with medical school.” Her parting advice to younger students interested in the Bee would be to just participate and try and their best, and along the way, they may just discover a love for neuroscience.

This is the first year Lake Forest College has hosted the competition and it will continue to host it for the next few years. The college’s Neuroscience Program and the undergraduate students of local chapter of the national neuroscience honorary Nu Rho Psi organized this year’s event. Over 35 students from this local Nu Rho Psi chapter volunteered in this effort.

Nu Rho Psi chapter co-President Logan Graham ’17, a senior majoring in neuroscience, stated, “We were honored to participate in the first Bee organized at the college. As an organization, one of our goals is to advance the discipline of neuroscience by encouraging intellectual and social interactions between students and others in the field and the Bee was a great platform for us to meet this goal”.

Lake Forest College’s Professor of Biology Shubhik DebBurman, who coordinated this year’s Bee, states, “Its terrific to see the high level of curiosity that these young adults have for how our brain works. Given the interdisciplinary nature of neuroscience, high school students that invest in it get to explore and combine interests in natural sciences, social sciences and humanities and learn about one of the true frontiers of knowledge: understanding our mind.”

This year’s competition was especially robust, with more students and schools participating in over a decade, along with several previous contestants returning to try again. Professor DebBurman hopes that next year the Bee will not only expand further within the Chicago region, but also attract more participants form neighboring Indiana and Wisconsin.

The Chicago Brain Bee is much more than a competition. This year, the daylong event designed programs designed to expose high school students to primary neuroscience research and introduce them to professors, graduate, and undergraduate students actively engaged in neuroscience research. Participants also learned of the many different pathways taken to a career in neuroscience and the diversity of STEM disciplines one can pursue in college.

After the tour, one contestant shared, “My favorite part was touring the science departments because the hands-on activities were very fascinating. It allowed us to get a full range of science experiences.” A parent chaperone added, “because it was hands-on, it increased my daughter’s enthusiasm for sciences”.  For others, the research talks given by undergraduates and faculty from various Chicago area institutions was their personal highlights.


The full schedule was as follows: