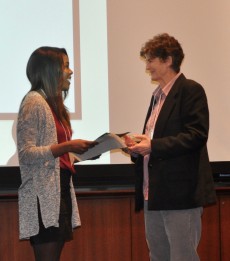 Morgan Marshall ’16, a biology major with an Art minor, won the First Prize at the meeting’s undergraduate poster sess...
April 08, 2016

The number of years in a row since 2003 that Lake Forest science majors have received awards for undergraduate research at the annual Chicago Society for Neuroscience (CSfN) meeting, the Midwest’s premier brain conference.  The latest success came at the 2016 conference just held at Northwestern Memorial Hospital on Friday (April 8, 2016).

The latest addition to this remarkable tally is Morgan Marshall ’16, a biology major with an Art minor, who won the First Prize at the meeting’s undergraduate poster session, which attracts undergraduates from top Universities and liberal arts colleges from Illinois, Indiana, Wisconsin, Iowa and Michigan.

On receiving her honor, Marshall said, “Undergraduate research has helped to expose me to many useful techniques and allowed me to gain skills such as effective team communication that will help better me in my career goals for research and medicine. The research I’ve done this year, I hope, helps contribute towards further understanding the protein alpha-synuclein and its relationships with PD pathology in some way. In my success I achieved at CSfN I feel like I owe the most to my lab team and my mentor Dr. DebBurman. Being with them taught me many helpful skills that I know will be useful in life like good work ethic, team work, and overall preparedness.”

Reflecting on the length and strength of success of Lake Forest student researchers at CSfN, Professor DebBurman states: “I am certain the last thing the conference organizers want to do is keep recognizing our students year after year, given the quality of other institutions and research mentors represented at this meeting. Our continuing streak of consistent excellence truly underscores just how well prepared Lake Forest students are for research substance and professional communication”. DebBurman believes that their level of competence is a direct outcome of the research-rich curriculum and strong co-curricular opportunities students engage with that gives that significant edge for a variety of professional skill sets. The diverse student outcomes speak volumes. “Over the past fifteen years, our students have excelled not only at CSfN, but also at several other conferences, at the regional, national, and international level. Many students have received prestigious national grants as well”.

Sarah Chiren ’16, a senior majoring in Neuroscience with a politics minor,  presented her senior research on traumatic brain injury that she conducted with Professor of Neuroscience Daniel Peterson at Rosalind Franklin University of Medicine and Science. Sarah is planning for MD studies after graduation.

Charles Alvarado ’16, a senior majoring in Neuroscience and Education, presented his senior research on Parkinson’s disease conducted in Prof. DebBurman’s lab, for which he had previously won the First Prize at the 2014 Chicago Pharmacology conference. His co-authors were Lake Forest students and graduates Keith Solvang ’11, Katrina Campbell ’14, Saul Bello Rojas ’16, Alexandra Roman ’16, Sarah Chiren ’16, Jothis James ’16, Peyton Schrag ’17, Logan Graham ’17, Paul Jones ’17, and Yuliya Zayats ’18. Charles is planning to pursue a Masters of Arts in Teaching degree, after which he hopes to become a high school science teacher.

Kayla Huber ’16,  a senior majoring in Neuroscience with an Economics minor,  presented on the growth of Neuroscience Program at the college, where she discussed the role of students like herself in integrating the curriculum with public education, K-5 outreach, and peer leadership. Her co-authors were other neuroscience student leaders Sarah Chiren ’16, Saul Bello Rojas ’16, Alexandra Roman ’16, Khadijah Hamid ’16, Logan Graham ’17, and Peyton Schrag ’17. Kayla is planning for graduate studies in social policy after graduation.

At her poster, Huber met with many professors who are interested in either establishing a neuroscience program or are in the process of doing so at their own institutions. She shares, “I have been asked many times how we have made our Brain Awareness Week so expansive, which gives me the opportunity to speak about interdisciplinary collaborations, the power of student run organizations, and Lake Forest College’s emphasis on public presentation of knowledge. The most common response I get from visitors is, “Wow, you’ve done a lot.” For Kayla, the program distinguishes itself from those at other institutions by what it demands, and that helped her become the well-rounded student she is today.  In her words, “It demands not just memorization of facts, but extracurricular leadership, public presentation, and practical application of knowledge.”

CSfN hosts the largest Midwest brain meeting every year and more than 400 scientists and students attended this year. Lake Forest College is a sponsor of this meeting and its neuroscience program faculty have a long history of service and leadership with the professional society, which is composed of academic and industry-based scientists who are interested in the field of neuroscience.

Elisa Mrackova ’19, a First-Year student planning for Neuroscience and Art History majors, was just selected as a Richter Scholar. She will conduct neuroscience research at the college this summer. She states, “Currently, I am enrolled in a biology course that focuses on the brain plasticity and as a part of my course I was required to attend the CSfN meeting. Nevertheless, the participation in the conference gave me much more than just an extra credit for my Biology class. I was able to listen to many inspiring presentations about the most recent research in the field of neuroscience moreover, it allowed me to meet with many of the scientists and listen to inspiring stories about their career paths.  I believe that as a science major I will be required to improve my presentation skills and CSfN meeting not only offered me a peek into the current research but also helped me to learn more about the scientific presentation skills so necessary for a science major freshmen like me.”

Paul Jones ’18, a sophomore Neuroscience and Chemistry major, did Parkinson’s disease research last year as a Richter Scholar. He adds, “These meetings show undergraduates both how research is presented and performed and some of the latest developments in neuroscience. This unique experience cannot really be emulated in the classroom. Personally, attending the meeting greatly increased my motivation to continue doing research. At the poster session, I was able to talk to a researcher about the research I plan to do. He heard about the cases in Guam that related to BMAA and thought that the research I plan to do relating it to Parkinson’s disease was interesting. It proved to me that the research I will do will be meaningful and important”.

The following Lake Forest College students have won awards at the conference since 2003:

2013
Ashley Reich ’13, 2nd Prize, is planning for graduate school and is currently working as a scientist with Tyson Foods.
Natalie Kukulka ’13, 3rd Prize, MD student at the University of Missouri (Columbia).

Ray Choi ’09, 3rd Prize, completed his MD from University of Colorado and is an anestheiology resident at Rush Presbyterian Hospital.

Alexandra Ayala ’09, Honorable Mention, is a math and science teacher for Teach for America.