The Medieval and Renaissance periods (c. 500-1600 CE) in Europe and the Mediterranean world saw the transformation of the Roman Empire and the emergence of European nation-states; the rise of two world religions (Christianity and Islam) and the fragmentation of Christianity in the Reformation era; the rise of European exploration and imperialism from the age of the crusades to the age of discovery; revolutions in political theory, theology, and science; and unparalleled achievement in art and literature, ranging from Gothic cathedrals to the works of Chaucer, Dante, and Shakespeare.  Students exploring this period through their work in the Medieval and Renaissance Studies minor (MARS) will have the opportunity both to study the foundations of familiar aspects of modern Western culture (universities, parliamentary government, the novel) and to experience the more exotic elements of the period.

Students pursuing the minor have the opportunity to take classes across a number of departments and programs, in order to achieve a rich and multifaceted understanding of this complex era.  At a local level, those in the minor will be able to take advantage of the vast collections of medieval and renaissance art and material culture at the Art Institute of Chicago and the Newberry Library. On an international level, those in the minor will be able to apply their course work from numerous study abroad program options available at Lake Forest. (Your MARS advisors are more than happy to talk with you about study abroad options!)

Theater 230: History of Drama I: Greeks to Shakespeare 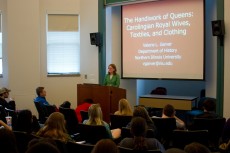 Professor Valerie Garver's recent talk on The Handiwork of Queens