Projecting a consistent and positive image allows the College to build and maintain an institutional identity that is easily and quickly associated with quality by all of our constituencies. The Office of Communications and Marketing reviews all external communications to ensure consistency.

The College follows the Chicago Manual of Style for writing and editing. People can access the online version.

The College’s colors are red and black. Pantone® (PMS) colors are to be specified whenever possible (see below). 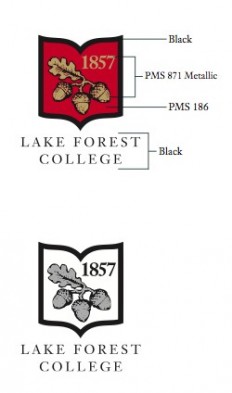 The word mark, or logo, is central to our identity system. It is the only logo authorized to represent the College, internally or externally. Any other logo should be discarded. The logo may not be altered, reversed, or distorted in any way. Do not: add other elements to the logo, delete text associated with the logo, print the logo on distracting backgrounds or overlapped with other text and images, or integrate the logo into illustrations or cartoons. Please allow at least a quarter inch (1⁄4’’) of space around the logo and do not reduce the size of the logo to less than a half inch (1⁄2’’).

The logo colors are PMS 186 Red, PMS 871 Metallic Gold, and Black. The logo may only be reproduced in these three colors together or in black and white.

The College Typeface is Janson Text. If Janson Text is not available, Times or Times New Roman may be substituted.

The Office of Communications and Marketing has responsibility for publicizing newsworthy activities of the College and the achievements of its faculty, students, and alumni. We pursue stories in local, regional, and national print and broadcast media that reinforce the College’s reputation for academic excellence, opportunities in research, and connection with the local community and City of Chicago.

If you have a story that may be of interest to the media, or if you want to write an opinion piece for a newspaper or other publication, contact Linda Blaser for help. If a reporter contacts you directly, please notify the Office of Communications and Marketing prior to the interview.

Below are some helpful guidelines for how to work with reporters:

Visual Communications can scan and deliver electronic images that are currently on file.

The Office of Communications and Marketing produces videos for institutional marketing purposes only. It does not create videos for individuals or groups. Professors wishing to videotape their events or classes can contact David Levinson in the Donnelley and Lee Library for assistance.

College publications not only represent the departments or programs they promote, but reflect the institution’s image as well. While not all publications need to look exactly the same, the more they adhere to the College’s visual standards, the more professional the image the College projects. Any publications directed to audiences outside the College must be approved by the Office of Communications and Marketing prior to production.

A variety of vendors can produce items such as pens, mugs, key chains, magnets, etc. Please inform the vendor of our specifications and provide them with the appropriate artwork. If you need assistance, please contact Visual Communications to facilitate the transfer of accurate information.

The preferred style follows that of the Chicago Manual of Style and Merriam Webster’s Collegiate Dictionary.

This is intended for use with conventionally printed and electronically published materials. Style and format in non-printed personal correspondence may vary. When in doubt, please contact the Office of Communications and Marketing for clarification.

These guidelines apply to all printed material. In personal correspondence the writer may wish to deviate from the suggested format. These guidelines should also be followed for friends and parents.

Spectrum, and other College publications, identify all people who attended the College, even if they did not leave with a degree, by listing their class year of preference immediately after their name set off with an apostrophe. Note that the direction of the apostrophe is curved away from the class year (’99). Note: Mac computer command for this is option + shift + ]. PC computer command is alt + 0146 (number lock on).The use of a straight foot symbol (‘) or the apostrophe facing the wrong way (‘) are unacceptable.

Alumnus Married to a Non Alumna/nus

Alumna Married to a Non Alumna/nus

For example, in the case of Amy B. Frerichs Hernon ’95, the B. should be manually deleted. But, if the alumna is not married, and she has a middle initial, it should be retained.

• Do not use an ampersand in place of the word and unless it is part of a formal title. (AT&T)

Buildings and Spaces on Campus

Historical periods (the Depression, the Enlightenment)

Sacred books (the Bible, the Koran)

• The formal name is capitalized (Fulbright Fellowship), but informal references (Fulbright grant) are not.

Titles of Dissertations and Theses

The Web and Email