Digital Chicago celebrated four years of research and innovation with the historic launch of its interactive website—Digital Chicago: Unearthing History and Culture—during a campus celebration on April 25.

Students, faculty, and staff were among the first to explore the collection of digital humanities projects now available online for public use. The guests browsed the new site and experimented with several of the interactive projects on laptop stations set up in Calvin Durand Hall.

Started in 2015, Digital Chicago: Unearthing History and Culture will eventually feature more than 20 faculty projects, approximately half of which had their official launch at the event. To date, Digital Chicago has involved the work of almost 40 student Digital Chicago Research Assistants, and through more than 30 grant-related courses, has touched the educational experiences of over 450 students.

“It’s an amazing diversity of information about the city, from material on archaeological digs to the history of redlining and restrictive housing covenants to 360-degree views of sacred spaces,” said Associate Dean of Faculty for Strategy and Innovation Davis Schneiderman. “We’re excited about the breadth of the works and we’re excited for the public to see it.”

In 2015, Lake Forest College received an $800,000, four-year (2015-2018) grant from The Andrew W. Mellon Foundation to involve students and faculty in exploring specific at-risk or forgotten sites in Chicago’s history, through urban archaeological digs, innovative digital humanities projects, and complementary coursework in a wide array of disciplines, including English, history, art, music, and others.

“One of the benefits of digital scholarship is its reach,” said Chicago Digital Humanities Coordinator Emily Mace. ”Digital projects, particularly open-access ones like Digital Chicago, are accessible wherever you are, with whatever device you’re using, and they tell human stories in ways monographs or academic articles—for all their importance—can’t do. It’s our great hope that this website will touch even more people than it already has.”

Through Digital Chicago, Lake Forest College has offered its students and the community:

Jaime Harris ’18 worked as a Digital Chicago Research Assistant for three years. “I got to design a book and cover, but also work with a team to design the Windy City in Motion exhibit,” Harris said. “Not many people get to graduate saying their work was displayed in Union Station. Most of all, I gained practical skills through tons of actual experience, pure and simple.”

On the website, for example, visitors can listen to digital recordings of historic parlor music commemorating the World’s Fair of 1893. “Something I worked on with Digital Chicago was looking at sheet music that we found people would buy as souvenirs to take home and play in their parlor,” Meyer said. “Now we’re putting on concerts where this music is being performed all around Chicago this year—the 125th anniversary year of the World’s Fair.” The first of these concerts, with music performed by Lake Forest College music faculty, will take place on May 29 at the Chicago History Museum, featuring both the music as well as foods first served at the Fair. Find out more here.

Other projects currently featured on the Digital Chicago website include an exploration of plays by Kenneth Sawyer Goodman, for whom the Goodman Theatre was named; “Death in Chicago,” an interactive story about public health crises in Chicago’s history, maps locating the artifacts from Graff’s archaeological digs, timelines about Jane Addams as a peace activist, the Pledge of Allegiance’s connection to Chicago, and others. The website can be found at digitalchicago.lakeforest.edu. 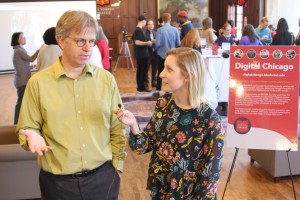