Shyness and boldness in squirrels: risk-taking while foraging depends on habitat type

When foraging, animals must balance their energy needs with the risk of being exposed to predators. Habitats vary in preda­tion risk and we expect individuals to vary in shyness and boldness when foraging in different environments. We assessed the foraging behavior of gray squirrels in forest, country and urban habitats and at varying distances from a potential threat: a human observer. We found the interaction between habitat type and threat distance affects squirrel behavior; forest squirrels were the shyest and urban squir­rels were the boldest, but the boldness of country squirrels depends on the distance of the potential threat.

Boldness, or the risk-taking behavior of a species, is relevant to our ability to predict the species survivorship (Tinkle, 2016). Optimal foraging theory states when an individual is searching for food within its environment, it will choose the foraging method that will have the highest energy benefit for the lowest energy cost. It states the most advantageous foraging method is selected through natural selection. This, in turn, affects an individual’s fitness, how well it is adapted to the environment, and its ability to reproduce. An individual’s boldness in an environment can be evolutionarily advantageous or disadvantageous depending on the envi­ronment.

By understanding survivorship and foraging theory, we can un­derstand the ecological consequences behavioral adaptations have on populations. Foraging theory is a branch of ecology that focuses on the behavior of a species when it obtains food in its environment. This forag­ing behavior is necessary for the survival and reproduction of the species. While obtaining food provides an individual with energy, searching for and obtaining food also requires energy. This is influenced by risk versus gain ratios due to predatory risk, size, quantity of food available and energy costs (Bowers et al, 1993). One method to quantify the foraging behavior of species, making it easier to analyze, is measuring the “giving up density”: the proportion of food left over in a set area or a patch. However, many studies do not take into account the effect differing environments have on an individual, thus the effect it has on giving up densities.

Our first study examined the foraging behavior of squirrels in urban, forest and rural environments. The test sites were Lake Forest Col­lege, an urban environment in Lake Forest, IL, a forested backyard in River woods and Bull Valley, IL, and a country environment in Randall Farm in Woodstock, IL. In the first trial, three green trays containing 20 peanuts each in shells were used and filled a third of the way with sand. In each of the three environments, trays were placed 20 feet away from the individual conducting the test and GUDs were measured after a trial period of 45 minutes. We measured GUDs by counting the number of peanuts in shells left in the trays. Tests were conducted between the hours of 9:00 am-6:00 pm. The results were recorded as the number of peanuts in shells left in the tray. A total of 15 trials were done for each of the urban, forest and country environments.

To measure squirrel boldness, our second study introduced varying distances. The experiment sites remained the same. We tested whether distance from the individual conducting the experiment would in­fluence the GUD. In each environment, each of the three trays containing 20 peanuts in shells filled a third of the way with sand were placed at 5, 10 and 15 feet respectively. The duration of the trials was reduced to 30 min­utes and 15 trials were conducted for each of the distances in the differing environments with a total of 45 trials for each environment. These trials were conducted between the hours of 9:00 am- 6:00 pm. After each trial, the number of peanuts in shells left in each tray was recorded. A total of 55 trials were done for each environment, respectively.

We used a two-way ANOVA to analyze whether or not mean GUD was affected by (1) observer distance, (2) environment, and (3) dis­tance x environment interaction. Our results revealed a significant inter­action of distance and environment [F (8,126)=227.21, p=0.0001]. When comparing GUD across the three environments and at variable distances, we used the LS Means Differences Turkey HSD to do pairwise compari­sons among the nine different treatments. Plotting the LS Means provided us with a visual representation that displayed the change in GUD across distance in each environment (Fig. 2). The results showed no significant difference in distance and GUD in the urban environment, as well as the forest environment (Fig. 2). The data did show a significant difference in distance and GUD in the country environment. As the observer distance increased, GUD decreased (Fig. 2).

Our data reveals several factors affecting squirrel foraging be­havior. Based on the pilot experiment, we see a trend where squirrels are more inclined to forage in a country or urban environment when compared to a forest environment. This is in stark contrast to Brown et al. (1992) who showed squirrels in open environments were more likely to experi­ence higher GUD. Our results reject our hypothesis. Several explanations can account for these results. One is the presence of the observer in the forest. Despite standing 20 feet away, squirrels in a forest habitat are not accustomed to human presence and may associate it with increased risk. Likewise, squirrels in an urban environment are more likely to encounter humans and therefore may be more likely to forage from the trays and ex­perience lower GUD. Another possible explanation is the season in which this study was conducted and the weather patterns at the time. The trials took place in the fall, beginning in October when temperatures were begin­ning to drop and periods of extended rainfall. In the autumn months, squir­rels are known to spend much of their time caching food for the upcoming winter. The sudden drop in temperatures could have altered the squirrel’s foraging behavior to begin caching more food. Young (2013) showed that when given the choice between walnuts or peanuts in the autumn months, gray squirrels are more likely to forage for and cache walnuts due to their high caloric content. With a perceived increased risk in predation and other priorities, the forest squirrels could have avoided the trays intentionally.

The data involving observer distance and environment also re­veals a similar pattern. Squirrels native to a forest habitat experienced a higher GUD relative to squirrels native to the country or urban environment. When taking distance into account, we see little variation in GUD among forest and urban squirrels at 5, 10 and 15 feet. Urban squirrels experienced the lowest GUD across all distances but the differences were not signifi­cant. The most significant difference is seen in the country native squirrels who experienced a progressive decline in GUD as the observer’s distance from the tray increased. These results were in line with our predictions and failed to reject our hypothesis. We believe these results could be ex­plained by how often squirrels in each of these environments are likely to encounter humans or other animals that do not exhibit predatory behavior on squirrels. Unlike forest squirrels, urban squirrels are more likely to ven­ture out and forage around humans because they become accustomed to their presence over time and have come to understand that they pose little predatory risk. Depending on how interactive humans are with the squir­rels in that environment, urban squirrels may also perceive humans to be a source of food. Additionally, country squirrels also exhibited lower GUD than forest squirrels most likely due to the presence of humans and other animals in that environment. The country trials took place on a farm that grew corn and sheltered various animals such as horses, chickens, hawks, turkey vultures, dogs and humans. Hawks and turkey vultures are pred­ators of the squirrel, so another explanation was needed to corroborate this data. We believe all the factors contribute to the boldness of squirrels. Urban squirrels develop a higher degree of boldness due to their constant interactions with humans. Country squirrels have a low degree of boldness when humans are in close proximity but due to their exposure to various species, they are willing to take the risk to obtain food at further distances. It is also plausible that because food is more abundant near humans or farm animals in the country, squirrels are willing to take the risk. Forest squirrels exhibit the lowest degree of boldness given their low interaction with humans and other species.

An issue with our study was, as mentioned earlier, the season in which these trials took place. Squirrels’ foraging behavior may be affected by the weather. In addition, Lake Forest College is located near Lake Mich­igan and experiences less variation in temperature and more precipitation, in contrast to Woodstock, IL, which is further inland. Consistency among weather patterns should be taken into account to minimize any weather-re­lated effects on squirrel behavior. Furthermore, the type of food we used could have affected the squirrel’s foraging behavior. Future studies should examine the relationship between GUD and different types of food in each of these environments. 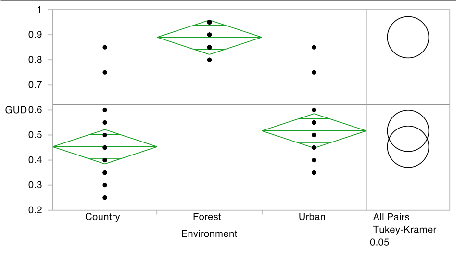 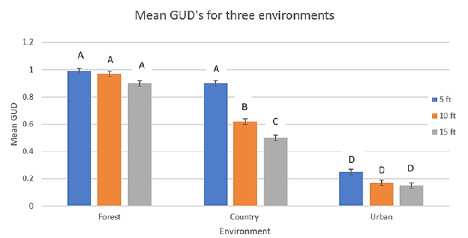 Table 1. The analysis of variance for the pilot studies done in urban, forest and coun­try environments.