Extinction, Invasion, Succession, and Climax Communities on the Human Hand: A Biogeographical Exploration at the Microscale

The human body hosts trillions of microbial communities, whose combined genetic information outweighs our own by at least a factor of ten (Wilson 2008). The human microbiome project is an effort to understand the bacteria which live on and in the human body. Concerted research efforts are being conducted to elucidate the biogeography of the human microbiome (Costello et al. 2009). An understanding of the exact processes which determine bacterial colonization of the body have impli­cations for human health (Grice et al. 2009). Although two individuals may be exposed to the same strain of bacteria, one individual may develop an infection, such as ringworm, while the other individual may not (Rosenthal 2013). Understanding the dynamics of bacterial colonization and invasion represents an important step forward in the study and treatment of infec­tious diseases.

Several studies have found that the bacterial composition of the human body has a definite spatial component (Grice et al. 2009). Bacteria seem adapted to exploit specific environmental factors present on different body parts (Grice et al. 2009). For example, dry areas of the human body like the arm are typically host to species which tolerate low water activity, such as the Staphylococci genus. Other pertinent micro-en­vironmental variables are pH, nutrient availability, and Oxygen supply (Wilson 2008). Microbial communities also exhibit inter-person variation. In a recent metastudy, Grice et al. (2009) found that, while the bacterial composition of subjects was highly variable between subjects, the func­tional groups of bacteria were predictably found in certain regions (e.g., Veillonella spp. on the teeth).

Despite hosting toxic bacterium, many humans do not exhibit disease symptoms (Rosenthal 2013). Host immunity to endothelium invasion, and population growth restriction mediated by the presence of antagonist bacterium are likely explanations (Costello et al. 2009). Understanding the degree to which environmental variables play a role in determining the ecology of bacteria of the human body will shed light on humans’ vulnerability to bacterial diseases, such as gangrene (Wahrman 2016). Resistance imbued by resident microbiome colonies may explain seemingly anomalous cases of hospital worker health in the midst of toxic bacteria species (Rosenthal 2013). A growing body of research is shed­ding light on the exact mechanisms which determine species composition on and in the human body. These studies are increasingly drawing upon biogeographic first principles to explain colonization, coexistence, and succession on the human body.

While humans are constantly in contact with bacteria, little information is known about the most important determinants of the hand bacterial composition (Wilson 2008). A colonization study of the epidermis in infants found a relatively stable set of succession (Dethlef­sen 2007). At first, only obligate aerobes and anaerobes can colonize the skin. Then, once a pioneer community has become established, the microenvironment becomes imbued with carbon dioxide, which facilitates the colonization by capnophiles, microaerophiles, and obligate anaer­obes. The pioneer species’ ability to alter the microenvironment in order to allow for colonization by other species represents commensalism and autogenic succession within a habitat (Lomolino 200). Trade-offs between dispersal ability and competitive ability are also likely in play in these young bacterial communities (Bohannan et al. 2002).

Our study sought to explore the recolonization of human hands after exposure to hand sanitizer (a disturbance event). We examined the hand fauna after half an hour in the cafeteria and then 48 hours later. The cafeteria likely contains a large number of biofilms (Capentier 1993). A growing body of research is elucidating the patterns of dispersal from biofilms to new environments with new niches (Hall-Stoodley 2004). Comparing the microflora across individuals revealed patterns in human hand colonization. Following the immigration pattern observation noted by Darlington (1957), microfauna that are better able to colonize disturbed environments may be prevalent on human hands after visiting the cafe­teria. These species of bacteria may have originated from biofilms. After 48 hours, we predicted that, following the equilibrium model of commu­nity assembly and the Clementsian succession hypothesis (Macarthur and Wilson, 1967, Clements 1916), the hand fauna would return to their pre-disturbance state.

We tested the following hypotheses:

These methods were adapted from the belly-button study un­dertaken by Henley et al. (2012). All samples were taken in the following manner: subjects were instructed to wipe alcohol-based hand sanitizer on their hands. The subject’s hand was swiped with a dry, sterile Q-tip®. The Q-tip® was immediately placed in PBS and mixed thoroughly. An hour later, each PBS tube was shaken and 50 ul of the suspension was pipet­ted into .95 ml of PBS to create a 1:20 dilution. No more than two hours after the sample was taken, 50 ul of the PBS dilution was pipetted onto the surface of a pre-labelled TSA plate. 5-7 glass beads were added to the plate, then the plates were shaken to spread the suspension over the entire surface of the agar. Inverted plates were placed in a 36C incubator. The plates were observed after 48 hours. Colonies were classified by a morphotype scheme. Species abundance was recorded for each plate. 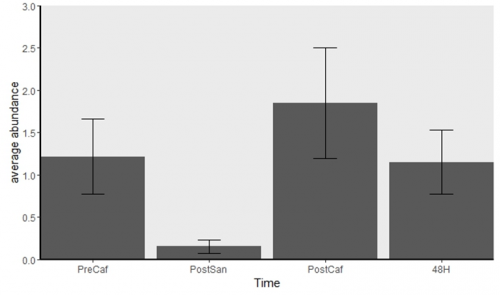 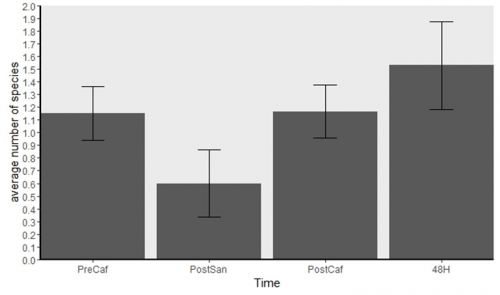 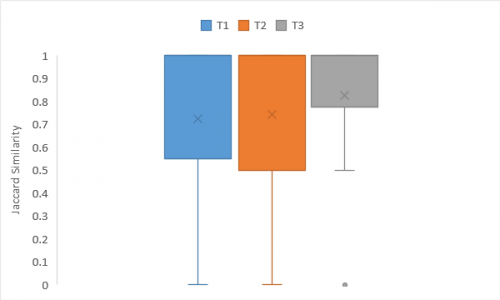 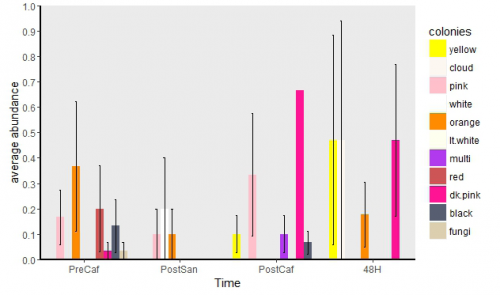 Figure 4. Average number of colonies found at each time with standard error. 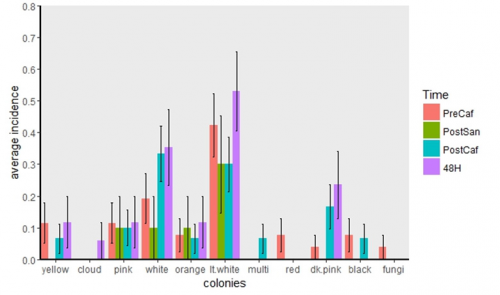 The Jaccard similarity index shows that hand bacteria pop­ulations were most similar between the pre-cafeteria samples and the 48 hour samples. Although there is no significant statistical difference between the means of any of the comparisons, more samples may reveal a statistical pattern consistent with our hypothesis. Our data indicate that, after 48 hours, hand species compositions equilibrated to the initial species composition. This finding supports the hypothesis that there is a stable climax community for each subject’s hand (Simberloff and Wilson 1970).

The sanitizer did not kill all species of bacteria; pink, orange, and light white colonies seemed to have fared the best. This finding is indicative of selective extinction: the species which survived are best adapted to withstanding exposure to hand sanitizer (Lomolino 1996). Further testing is needed to ascertain the bacterial colonies resistance to alcohol. The plates which did show growth following sanitization may have simply been contaminated.

Following the metapopulation theory described by Levin (1970), the pattern of recolonization may be explained by extinction of a species in a particular patch being replenished by a population from a nearby patch. In the cafeteria, many species may have colonized the hand because there were few species to resist invasion (Elton 1958). These species may represent selective immigration: under this hypothesis, cer­tain bacterial species with specialized traits conducive to colonizing the hand became preponderant (Wallace 1880). It is also possible that the source patch may not have been in the cafeteria at all but may have been from elsewhere on each individual. Future studies should also test for the species assemblages on people’s arms to determine the within-person rate of immigration.

48 hours later, the species composition became more similar to the pre-cafeteria composition than to the post-sanitizer and post-cafeteria compositions (Fig. 4). This trend exemplifies habitat selection, in which the habitat is the main selective pressure on the hand. Examining Figure 4 shows that the species which tended to dominate immediately after the cafeteria were not the same as those that dominated 48 hours later. This may be indicative of competition between ecologically related species (Whittaker and Fernandez-Palacios 2007). Species which were adapted to colonize the disturbed hand environment were not as competitive as secondary and tertiary colonizers. After an initial wave of colonization, species best adapted to compete for limited resources on the human hand may have become preponderant (Bohannan et al. 2002).

Overall, there was a surprising lack of diversity in our study. We identified 11 morphospecies of bacteria. This is most likely due to our hand swabbing protocol, which has been shown to reveal less than 1% of the bacteria present on the human hand (Carpentier 1993). Further­more, the most definitive methods for describing the hand biome are light-microscopy, scanning electron microscope, fluorescence microscopy, confocal laser scanning microscopy, and transmission electron microsco­py (Wilson 2008). Future studies should replicate our sampling protocol but use more advanced techniques to identify hand species. There is also the possibility that the recolonization was not from the “mainland” but rather from the arm of an individual. Within-human bacterial migration should also be considered by future studies seeking to test biogeographic principles on the human hand.

Our results may be more congruent with the general dynamic model of island biogeography developed by Whittaker et al. (2010). In this theory, the equilibrium species capacity of an island is dependent on the size of the island, the topographic complexity of the island, and the time since emergence of the island (Whittaker et al. 2010). In our system, the species capacity of the hand may be covariate with the size of the individ­ual’s hand, the microenvironment of the hand, e.g., pH, salt concentration, water potential, as well as the frequency of hand washing (Wilson 2008). Future studies should compare not only the skin bacterial components but also microhabitats across hosts, possibly by taking a small endodermal skin sample. Overall, this research represents an important starting point for future human-scale biogeographic studies. Further research may help develop treatments for microbial infections and shed light on disease transmission.

Clements, F. E. (1916). Plant succession: an analysis of the development of vegetation (No. 242). Carnegie Institution of Washington.