The fall 2017 sports season gave Forester fans lots of reasons to celebrate. Here’s the roundup for the season:

FOOTBALL: 8-2, 4-1 MWC South (2nd in division)
Lake Forest set a program record 452 total yards per game and had 13 players earn All-MWC South honors, including MWC Offensive Skill Player of the Year and AFCA First Team All-American Joey Valdivia ’18. Valdivia ran for a school record 1,809 rushing yards on the season and tied the mark he set a year ago with 30 total touchdowns. It was the fourth 8-2 record in the last six years for the Foresters, who climbed into the NCAA regional rankings late in the season. 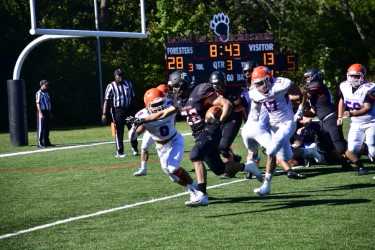 Joey Valdivia ’18 Credit: By Kyra Vidas ’18
VOLLEYBALL: 12-14, 4-5 MWC (t-6th)
Lake Forest won four of the last five matches of the season and was still in contention for a spot in the four-team MWC Tournament until the final week. Despite missing six midseason contests and having to switch positions due to injury, outside hitter-turned-libero Grace Larson ’19 was named Second Team All-MWC for the third year in a row.
MEN’S SOCCER: 12-7-1, 7-2-0 MWC (3rd), MWC Tournament Champions
The Foresters defeated St. Norbert College 2-1 and Grinnell College 2-0 to win the MWC Tournament for the third time in the last five seasons. Elyas Ingram ’18 and Seton Trostle ’18 were named First Team All-MWC and three others earned second team honors, including Gaston Aubert ’19, who scored the first goal in both of the team’s MWC Tournament triumphs as well as its NCAA Division III Tournament game at the University of Chicago.
Men's soccer
WOMEN’S SOCCER: 7-8-2, 5-2-2 MWC (5th)
The Foresters closed out the season with three consecutive victories but still finished just one point away from making their 14th MWC Tournament appearance in the last 15 years. Shari Jacobson ’18 was named First Team All-MWC and Molly Major ’19 to the league’s second team. They helped Lake Forest attempt more shots than its opponents in each of the final 15 games of the year.
WOMEN’S TENNIS: 14-1, 8-1 MWC
Lake Forest finished the fall with a 10-match winning streak and secured the #2 seed in the MWC Tournament in late April. The team’s last competition of 2017 was the MWC Individual Tournaments, where Julie Lord ’21 and Leeza Bodnar ’20 captured a championship at #1 doubles and Allison Watts ’19 and Grace Gould ’21 claimed titles at #2 and #5 singles, respectively. The team’s 2017-18 season will resume in March.
CROSS COUNTRY: Men 3rd, Women 5th at MWC Championships
Jonathan Stern ’18, Jorge Villanueva ’19, and Philip Wilson ’20 earned All-MWC honors by placing seventh, ninth, and 13th, respectively, to lead the Forester men at the conference meet. The women were paced by MWC Newcomer of the Year Yaneli Guajardo ’21 (12th) and fellow All-MWC honoree Cassie Lira ’18 (19th). Both teams also placed 18th at the NCAA Division III Midwest Regional with Stern (25:04.5 for 8K) and Lira (22:38.7 for 6K) recording the fastest times in program history. 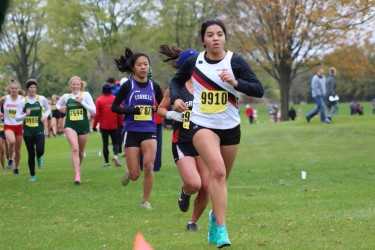 Three first-year players on the team earned all-conference honors by finishing in the top 10, including MWC Newcomer of the Year Faith Jung, and associate head coach Tamlyn Tills was named MWC Co-Coach of the Year. The Foresters’ scoring average is more than 13 shots per round better than a year ago and they will continue the 2017-18 season in the spring.