Students looked a bit anxious waiting for the biggest career event on campus—Speed Networking—to start on October 26. But once the speed-dating-style rounds began, their pre-event training kicked in.

At the first bell signaling the start of the night’s rounds, a swarm of voices rose as students sat down one-on-one with professionals, representing a vast array of industries and organizations, and started chatting in the networking event that has become a hallmark of the College’s Career Advancement Center (CAC).

Over the next two-and-a-half hours, more than 100 students and 84 professionals engaged in more than 1,500 conversations, not including the mingling and side chats that took place before the five-minute rounds officially started.

The event, held in the gym at the Sports and Recreation Center, was a first for Elizabeth White ’20 from St. Louis, Missouri. “I haven’t had any real experience professionally talking to people and networking,” she said. The finance and computer science double major signed up for Speed Networking to overcome that hurdle—and to pick up some career advice from professionals in the field. “I want to see how computer science works in the finance industry,” she said.

After just two rounds, White acclimated herself to the quick-moving process. “I feel a lot better,” she said. “The professionals are so welcoming. I’m having fun.”

Neuroscience major and religion minor Trevor Buhr ’18 of Ottawa, Illinois was a Speed Networking first-timer who took time out from graduate school applications to participate in the CAC event. “I thought it would be a good idea to come and see what is out there for someone with a neuroscience background and my other interests, like religion, sociology and economics,” he said. “I’m not exactly career hunting, but this is a good exercise for the future—and you never know.”

Professional Cheryl Jackson-Hudson, chief operating officer of the Lake County YWCA, was equally pleased with the Speed Networking event, also her first. “I’ve had some really great students come to talk to me,” she said. “My marketing person asked me to find somebody to help her and I just interviewed two digital marketing students that I’m thinking about for internships. This is a great way for students to round out their resume so they can get some opportunities before they graduate.” 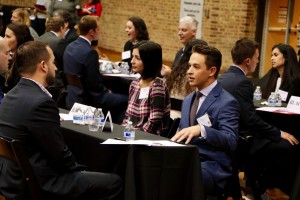