More than 420 first-year and transfer students explored Chicago, from the northside Peggy Notebaert Nature Museum to the Southside Museum Campus and from examining the human brain to learning about the city’s architecture, on August 22 as part of their orientation to Lake Forest College.

The new students, who hail from 30 states and 20 countries around the world, traveled with professors and classmates from the Lake Forest Metra commuter station, located just a half-mile from campus, to Chicago, just a one-hour train ride away.

First-year students took excursions that related to their First-Year Studies class. With titles like “American Playwrights in Chicago,” “Chicago Media Industries,” “Robots and Brains: Fantasies and Facts,” and “Dinosaurs, Meteors, and Scientific Argument,” most First-Year Studies courses are designed to use the city as an extended classroom where students can experience subjects and test theories firsthand. Transfer students took a Chicago River cruise and met with an alumni who work in the city.

Tuesday’s trip was the first of many excursions students will take while at Lake Forest College. The Center for Chicago Programs, located in the Mohr Student Center, is the campus hub for all Chicago-related programming. 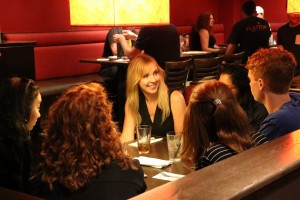