In the past month, the College recognized Director of Athletics Jackie Slaats, also affectionately called Coach Slaats by student-athlete alumni, for her dedicated 30 years of service.

Slaats was recognized during halftime of the women’s basketball game against Cornell College on February 11 for devoting 30 years of service to the College. Several alumni returned to campus to honor her achievements.

Lake Forest College welcomed Slaats in 1986 as the head women’s basketball and volleyball coach. At the time when she was hired, current head handball coach Mike Dau served as athletic director. Coach Dau remembers the day when Jackie visited the College for her interview.

“I had already interviewed two other candidates, neither of which impressed me,” he said. “When Jackie stepped across the threshold without even saying a word, I knew not only were we going to offer the position, but I thought to myself, ‘I don’t think we’ll keep her for very long.’”

When Slaats took the position, she elevated the women’s basketball and volleyball programs to a level they had never been before, according to Dau. “With excellent leadership skills, she was highly organized and disciplined, all the elements that are required of a successful coach. And her relationship with her peers was outstanding,” he said.

Coach Slaats boasted a 386-133 overall record with six conference championships in women’s basketball, ranking her among the top 20 in NCAA Division III with a .743 career winning percentage. As the head coach for volleyball, she coached the team to a 100-84 record in six seasons.

Coach Slaats was appointed the College’s Director of Athletics in 1992 and later added the role of Senior Advisor to the President in 2008, when she resigned her coaching position after 22 successful coaching years.

As a Senior Advisor, Jackie works alongside Lake Forest College President Stephen Schutt who has held this position since 2001. “Jackie has been one of my closest colleagues throughout my years at the College, and I’ve been privileged to work with her,” Schutt said. “Her talent, leadership and dedication to the College are unsurpassed, and our remarkable success in athletics is due to her strong, strategic direction. Moreover, the College’s senior staff and I rely on Jackie’s good judgment in a host of areas beyond athletics, and I routinely seek her input before making any important decision.”

Since holding the administrative role, Jackie’s leadership and strong desire to uphold a motto she established as Director of Athletics, “Lake Forest College: A Tradition of Excellence,” can be seen through several initiatives designed to improve the experience for student-athletes and build spirit surrounding Forester Athletics.

These initiatives include the $17 million renovation of the Sports and Recreation Center in 2011, which enabled the College to rank 18th in the “best athletic facilities” category by the Princeton Review in 2016. Farwell Field, the home of Forester football and soccer, was renovated in 2004, and the hockey rink in 2014 and 2016. Further, Jackie also fronted the addition of seven varsity sports to the roster including men’s and women’s cross country, women’s hockey, men’s and women’s golf, and most recently, men’s and women’s distance track.

In addition to those athletic transformations, Slaats spearheaded the inception of the F.A.N. Club (Forester Athletic Network), the College’s athletics booster club, and the Forester Game Plan, a four-year program that seeks to prepare student-athletes for life after Lake Forest College. The Forester Game Plan is a collaborative effort of the athletic department, Career Advancement Center, and Forester Network that includes faculty, staff, alumni, family, and friends of the College. 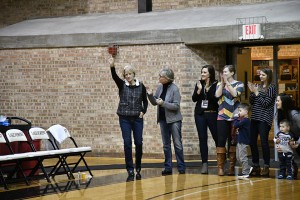