Mate choice behavior reflects the likelihood of an individual choosing to mate with a particular individual and not another. In the guppy, Poecillia reticulata, mate choice studies have revealed that males have a preference for large females. In this study we assessed if mate choice in male guppies was affected by competition from other males. We predicted that males would court smaller females more often when faced with competition. We observed the courtship behavior of males toward large and small females with and without other males being present. We found that competition from other males did not affect how often males courted larger females, so it does not affect mate choice in male guppies.

The study of mate choice is an important topic in the field of animal behavior. The term mate choice is defined as the behavior that leads members of a particular sex to mate with specific members of the other sex instead of others (Patrick and Bateson, 1983). Individuals within a species have unequal reproductive prospects, so recognition of physical indicators of fecundity and good health during mate selection is rewarded with enhanced reproductive success. This encourages individuals to be selective when choosing a mate (Patrick and Batesdon, 1983). In some bird and mammal species, males prefer to mate with larger females because a larger body size is an indicator of greater female fecundity (Patrick and Batesdon, 1983). Male preference for larger females has not only been limited to birds and mammals, but also includes some insects such as the cricket, Anabrus simplex, the crustacean, Asellus aquaticus, and fish species such as Cottus bairdi (Kalliday, ed. Patrick, 1983). Male guppies, Poecilia reticulata, have also demonstrated an affinity for larger females (Herdman et al., 2004).

The Trinidad guppy, P. reticulata, has been extensively studied and has contributed greatly to our understanding of sexual selection, evolution, and mate choice. Guppies are known for their diverse color patterns in males, sexual dimorphism, and promiscuous mating system. Males do not vary much in size, but each has a unique color pattern involving spots and patches of black, blue, and orange. This diversity is believed to be the result of female preference for orange coloration and unique color patterns (Houde, 1987; Hampton et al., 2009). Females are gray, but can vary greatly in size and grow much larger than males. Female guppies tend to mate with multiple males during their lifetime (Houde, 1997).

Although much is known regarding mate choice in female guppies, male mate choice is still a poorly studied topic. All that is known is that male guppies prefer larger females and that higher population densities increase competition between males (Herdman 2004, Jirotkul 1999).

It is possible that the courtship behavior of male guppies is inconsistent and does not always reflect their true preferences for mates. Obstacles such as competition from other males may cause males to court less desirable smaller females because the competition makes mating with the desirable larger females too difficult. We hypothesized that competition from other males affects mate choice in male guppies causing them to court less desirable females more often than when there is no competition. To test this hypothesis, we performed observational studies comparing the frequency of courtship with small and large females when the males were alone and when they were in a group with other males. We predicted that males would court a higher proportion of small females when they were with other males than when they were alone with females.

Our subjects consisted of 104 guppies, 52 males and 52 females, from 13 isofamilies containing genetically related males with similar color patterns. Four males were taken from each isofamily and paired with four females from another isofamily chosen at random. Males were not paired with females from the same isofamily.

We recorded the frequency of four behaviors by males: display, chase, thrust, and fend off. Display behavior is when a male positions itself close to a female and assumes a sigmoid posture, which is similar to an S-shape (Houde, 1997). Chase is when a male closely follows a female as she swims; if two males followed the same female, it was counted as two chases. Thrust is when the male attempts to deposit sperm in a female by touching his gonopodium (anal fin) to her gravid spot. Anytime a male was observed touching a female, we assumed the male to be exhibiting a thrust. Fend off is when a male is chasing a female and drives off another male who tries to usurp his position.

Three observers made semi-weekly observations consecutively for a month-long period. Each observation involved introducing four males from one isofamily to four females from another isofamily and measuring their lengths with the camera and ImageJ. The observations involved two treatments, alone and group, which were conducted on the same day. All four females and one focal male were placed together in a tank for the alone treatment. This was repeated four times until all four males had been observed. For the group treatment, all four males and all four females were placed together. The guppies were allowed to habituate for five minutes after introduction to a new tank. During each observation, the frequency of display, chase, thrust, and fend off behaviors by males was recorded for ten minutes, along with the size of the female at which the behavior was directed.

After observations, the fish were photographed using an Olympus Camedia C-3000 camera. The length of each fish was determined using the photos and ImageJ software. Statistical analyses were done with chi-square tests using Microsoft Excel and QuickCalcs by Graphpad Software.

We used goodness of fit chi-square tests to determine if there were significant differences between the number of courtship behaviors directed at large and small females. We used heterogeneity chi-square tests to determine if the alone and group treatments differed in the relative proportion of courtship behaviors directed at large vs. small females. We were unable to perform t-tests as originally intended due to the low frequency of the rates of behavior exhibited by the fish. Males exhibited the display (Fig. 1), chase (Fig. 2), and thrust (Fig. 3) behaviors significantly more toward large females than small females for both the individual (respective goodness of fit chi square values:  p < 0.0001, p = 0.0056, p < 0.0001) and group (respective p-values: p < 0.0001,  p < 0.0001, p < 0.0001) treatment. Our heterogeneity chi-square results indicate that although males directed more courtship behaviors toward large females in both treatments, the relative frequency of chases towards small females was greater in the alone treatment (p = 0.0231), but there was not a significant difference for displays (heterogeneity chi-square: p = 0.6409) or thrusts (p = 0.2008). 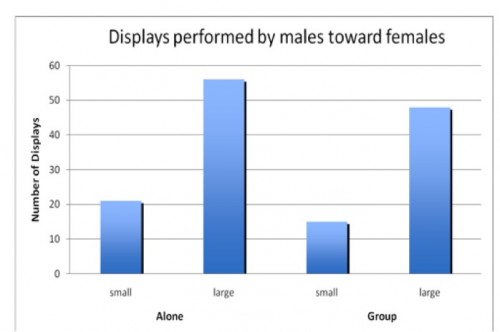 Figure 1. Number of displays males made towards large and small females with (group) and without (alone) other males prsent. 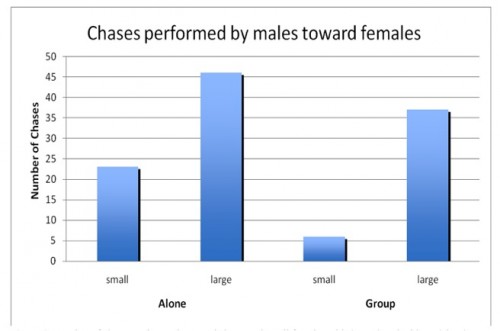 Figure 2. Number of chases males made towards large and small females with (group) and without (alone) other males present. 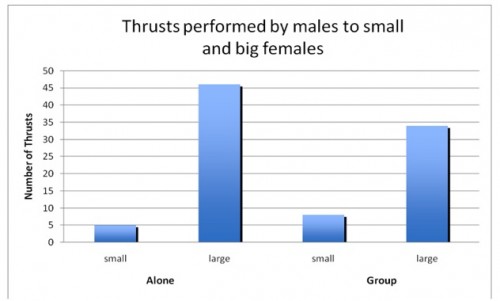 Figure 3. Number of thrusts males made towards large and small females with (group) and without (alone) other males present.

These results demonstrate a distinct male preference for larger females. This preference was seen consistently for all behaviors, regardless of whether the male was the only male in the tank or was with other males. Our initial prediction suggested that in the presence of competition, males will adjust their choice and the rate of courtship with the smaller females will increase. However, our results suggest that competition from other males does not cause males guppies to adjust their courtship behavior by pursuing less desirable females.

Female guppies are more likely to flee when being pursued by two males instead of one (Brewster, 2003), so we are unsure as to why there were more instances of chasing during the individual treatment than the group treatment. This may be because we quantified chases as the number of times a chase started instead of the total duration of the chases. Fewer chases in the group may have occurred because the males were more persistent with their chases when other males were present, lest they lose their position and paternity to a competitor. A male in the alone treatment would be able to abandon a chase to rest or pursue another female without forfeiting the previous female. This would increase the number of recorded chases.

We observed that the frequency of all behaviors was much lower than the frequency we based our preliminary observations off of. The guppies appeared very inactive when first introduced to the observation tank. We believe that the guppies were still stunned from being transported because our acclimation period was too short. An acclimation period of 24 hours or more may have allowed activity levels to return to normal. Nevertheless, we still observed a marked preference for larger females as expected from previous research, so we do not believe this changed the overall direction of our results. Another change we would like to make would be to randomize the order of our alone and group treatments. Our experiment was not temporally controlled because the alone treatment always came before the group treatment. This may have affected female responsiveness to the males. A third change is that we would like to control for variation between our three observers by observing the tanks together instead of separately.

We would like to thank Anne Houde for her consultation and Lake Forest College for the use of its facilities and equipment.