Human auditory perception is a phenomenon that relies on the detection of various frequencies in environmental sound waves. The range for detecting a sound wave frequency varies amongst individuals, but is typically 20-20,000 Hz. The purpose of this study was to measure an individual’s absolute threshold to an auditory stimulus via two methods: the constant stimuli method and the signal detection theory method. In part 1, the participant was asked to listen to a whistle at five different frequencies and state whether or not they detected the sound. For part 2, they were presented either with no stimulus or with the stimulus and were asked to state whether or not they detected the sound. The individual’s measured absolute threshold was 301 Hz with a sensitivity of 2.32 and a criterion of 1.27. Thus, this individual was fairly sensitive to the signal and had a bias to say “no”. In conclusion, it was the signal detection theory that could determine the true perceptual ability because it allowed for the estimation of response biases.

The human ear is a unique organ that allows individuals to detect sound. The ear detects sound vibrations from sound waves traveling through the environment. The number of vibrations, or cycles, produced per second is the frequency. Humans can perceive frequencies ranging from 20 Hz to 20,000 Hz (Goldstein, 2010). Different sounds can be perceived as having different pitches. For example, a sound can be described as high or low. These differences in pitch are related to differences in frequencies. Sounds with higher frequencies are perceived to be higher pitched, while sounds with lower frequencies are perceived to be lower pitched (Rowan, Kapadia, & Lutman, 2004).

The purpose of this study is to measure an individual’s auditory threshold. Since sensitivity to sound deteriorates as one ages, it is important to know one’s current auditory threshold. The general research question asked was what is the participant’s threshold to a high pitched sound. From this study, I hoped to be able to measure the perception of sound by determining whether the participant was aware of a barely detectable pitch. Specifically, measuring the absolute threshold for sound would allow me to understand the smallest amount of stimulus energy necessary for the participant to detect the stimulus.

Another goal of this study was to understand and to compare two different methods of measuring absolute threshold: constant stimuli and signal detection theory. The method of constant stimuli was developed by Gustav Fechner as part of the psychophysical approach to perception. It entails randomly presenting the participant with several stimuli ranging in intensity. From this, the threshold can be determined by finding the intensity at which the participant can detect the stimulus on 50 percent of the trials. Although there are several other classical psychophysical methods introduced by Fechner, the method of constant stimuli is most accurate because it involves many observations and stimuli are presented in random order to prevent bias (Goldstein, 2010).

However, two processes govern the observer’s responses during the constant stimuli method: sensitivity and response bias. In other words, the observer’s ability to detect the stimulus energy in addition to non-sensory factors such as attention, motivation, expectations, biases, and conscientiousness contribute to the responses that the observer gives. Thus, the signal detection theory was created as a method to tease apart the observer’s response bias and sensitivity and to study how we make decisions under conditions of uncertainty (Goldstein, 2010). In such a method, the observer is either presented with noise (no stimulus present) or stimulus plus noise of low intensity. By measuring the proportion of hits, saying yes when a stimulus is present, and false alarms, saying yes when there is no stimulus, the sensitivity and observer’s criterion can be determined. Furthermore, a receiver operating characteristic curve (ROC curve) can be plotted to represent the tradeoffs between specificity and sensitivity (Goldstein, 2010).

For this study, a dog whistle program was used on an iTouch. Specific frequencies were typed into the program and the whistle emitted a sound through the speakers in the iTouch for 5 seconds. To ensure random presentation of trials, an online program was used to randomize all 75 trials. Finally, Microsoft excel software was used to record the participant’s responses to the stimuli, and SPSS was used to construct all graphs.

Two methods were used to calculate the participant’s sensitivity to the sound stimulus: constant stimulus and signal detection theory. Both experiments were conducted in an office at my residence in Vernon Hills, IL. The participant was instructed to sit in a chair, close his eyes, and focus solely on whether or not he heard the whistle. All precautions were taken to eliminate any excess noise from the surroundings (windows were closed, televisions were turned off, and no one else was home at the time). Next, 5 different frequencies (290 Hz, 300 Hz, 310 Hz, 320 Hz, and 330 Hz) were played in random order, 15 times each (see Table 1). The iTouch was placed approximately 2 feet from the participant and a random number table was used to determine random order. The participant had 5 seconds to listen to the sound and determine whether or not he could detect it. After the 5 seconds had elapsed, the participant was instructed to answer either “Yes, I detect the whistle” or “No, I don’t detect the whistle” (see  Table 2).

The outcome matrix from the signal detection theory describes what percentage of responses were false alarms, hits, correct rejections, and misses. In this study, the participant had 90% correct rejections and 85% hits (see Table 5). Finally, the participant’s sensitivity, d’, was calculated to be 2.32, and their criterion (β) was calculated to be 1.27 (see Table 6). Using these data and the data from the outcome matrix, an ROC curve was plotted (see Figure 2).

Two normal curves summarize the level of activity in the sensory system. They are separated by the participant’s d’ and summarize the proportion of hits and false alarms by the areas under each curve (see Figure 3).

Based on these data, the participant’s sensitivity is fairly average since sensitivity values range from approximately zero to four. Although a higher d’ indicates a better ability of detecting the signal, a sensitivity index of 2.32 is still pretty good. The criterion value of 1.27 indicated that the participant had a bias toward saying “no.” The participant made few false alarms and had a lower hit rate than if he had made many false alarms (Wickens, 2001).

Several factors affect the confidence of these measurements. First, the study was not conducted in a laboratory and although precautions were taken to control for outside variables, it cannot be said with complete confidence that the only stimulus was the dog whistle. If there were other audio stimuli present during the constant stimuli trials, the absolute threshold might have been slightly larger than it would have been in a completely silent room. Furthermore, if the absolute threshold was measured to be larger than it actually was, the signal detection method would have used a stimulus intensity that was not difficult to detect. If the signal detection method used an intensity level higher than it should be, then the sensitivity index would be inaccurate as well.

Another important factor to consider is the initial range of frequencies chosen to be used for this study. The frequencies ranging from 290-330 Hz were selected in a pilot study with an undergraduate student at Lake Forest College; 290 Hz was the lowest frequency at which the student could detect any sort of sound. Thus, this frequency was used as the lowest intensity of stimulus for the experiment. In future studies, several pilot tests should be run and an average should be taken to determine what the lowest detectable frequency should be. Perhaps the student’s hearing was not as sensitive as this study’s participant, and thus the lowest intensity of stimulus that could still be detected might not have been presented in this study. It is important to have a range of stimuli that are all detectable, but not too easily detectable across all levels.

Overall, the signal detection theory experiment was successful in teasing apart the participant’s sensitivity and response bias; this was a limitation to the constant stimuli experiment. The constant stimuli approach assumes that the perception of a stimulus is discrete; it is either yes or no (Macmillian & Creelman, 2005). However, it does not account for possible confounds to the participant’s perceptual ability. For example, two individuals might detect a stimulus 60% of the time yet have different perceptual abilities. Their detection of a stimulus might simply be a result of having a tendency to say “yes” more often. To reconcile the differences between these two individuals’ perceptual abilities, the signal detection method treats sensitivity to a stimulus as a continuous variable dependent upon response biases.

Future work needs to be done to learn more about what causes individuals’ biases to vary. Eliciting the factors that determine whether an individual has a conservative bias or not can be important in understanding what causes differences in perceptions. Furthermore, signal detection methods can be used in areas outside of perception. Essentially, signal detection theory is a statistical theory that can be used to improve empirical testing in a variety of fields including medicine, economics, and communication.

I would like to thank Professor Naomi Wentworth for her direction and suggestions for this study. Special thanks to my father for taking the time to participate in my study. 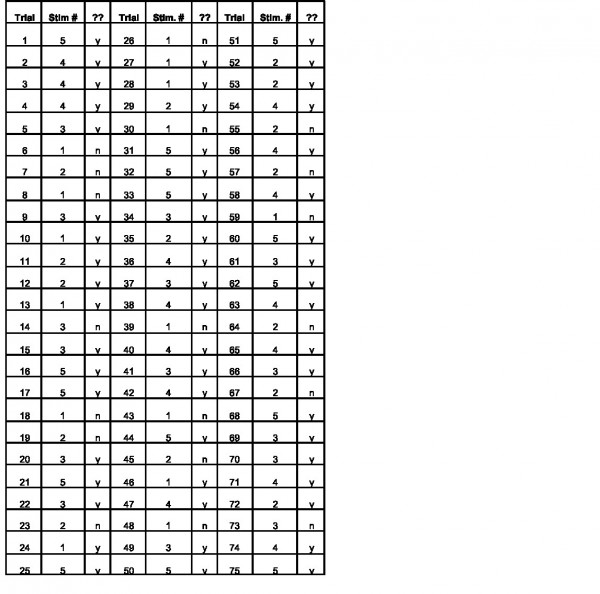 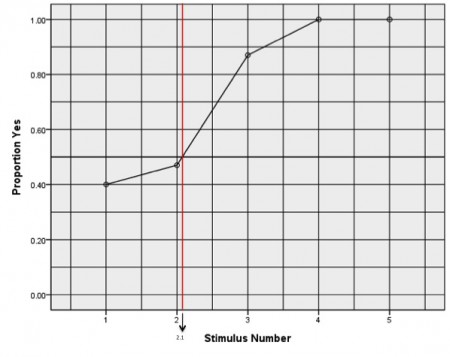 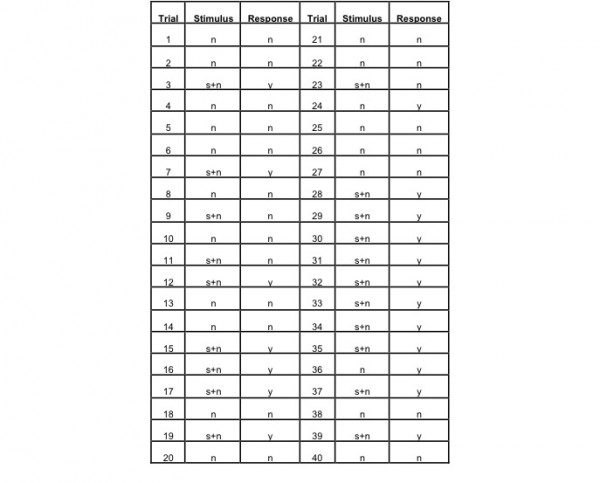 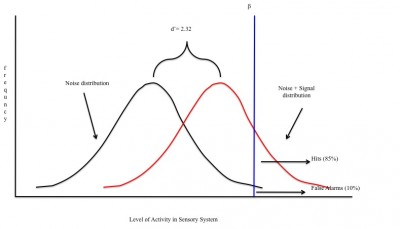 This author wrote the paper for Psychology 310: Sensation and Perception taught by Dr. Naomi Wentworth.