When Matt Helderman ’11 stopped by campus during finals, 50 students jumped at the chance to meet with the film entrepreneur who got his start in the industry while still a student at Lake Forest College.

Students, faculty, staff, and coaches lunched with Helderman and learned about how he launched his career as a student, how he adapts to meet the changing media marketplace, and what part Lake Forest College played in his success.

The keys to his success? “Resiliency is huge,” he said. “The second thing is networking and not just with peers, but with people diversely different from you. Grow a brand and the network around it.” Lastly, “you have to have a team. You have to have a support staff,” he said.

The philosophy major, English minor, and hockey player wrote and directed his own full-length feature film, The Alumni Chapter, while a student at Lake Forest College. After graduation, he co-founded Buffalo 8 Productions, a full-service media company in California, and, later, BondIt, a turn-key financing solution for the entertainment world.

“Studying here, I found things that I was passionate about—film and literature—but philosophy opened up this idea of the way you think and process information,” he said. ”For me, philosophy was a really interesting way to become entrepreneurial, to become curious about things, to think about the world in different ways than I ever had before. That’s our story as a company.”

After speaking to the group and answering questions for nearly an hour, Helderman met one-on-one with students to give advice and make connections.   If you would like to share your career experiences or be a resource to students at the College, please contact the Career Advancement Center at 847-735-5235 or careers@lakeforest.edu. 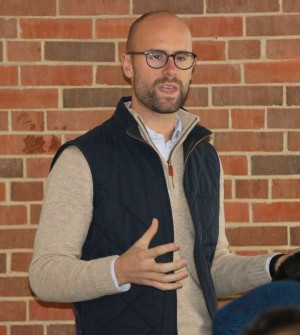 Lunch and talk with Matt Helderman ’11

On Friday, December 9, students and faculty gathered to have lunch with alumnus Matt Helderman ’11 in the Student Center. The philosophy major, former student-athlete, and entrepreneur founded Buffalo 8 Productions, a full-service feature film and commercial production company, and BondIt, a turn-key financing solution for the entertainment world.
View full gallery