The connection between psilocybin and dreaming

Dreaming is a universally shared concept between humans. The study of dreaming offers unique insights into human consciousness. There are five stages of sleep: stages 1-4 and rapid eye movement (REM) sleep. REM sleep is also known as active or desynchronized sleep and is when dreams typically occur. The stage of REM occurs about 90 minutes after a person has fallen asleep. Typical REM stages usually last about 10 minutes, but increase the longer a person is asleep; it is possible for REM sleep to occur for up to an hour. In previous studies, subjects that were awakened during the REM stage would report hallucinatory experiences that would follow a narrative (Nir & Tonioni, 2010; Hobson et al., 2000). Moreover, it was reported that these hallucinations involved vivid sensory and motor functions (Nir & Tonioni, 2010; Hobson et al., 2000). To be more specific, subjects would describe dreams as highly colorful. At the same time, subjects would report seeing familiar faces and objects (Nir & Tonioni, 2010; Hobson et al., 2000; Hall & Castle, 1966). Dream research offers a field of study to gain knowledge about the function of specific brain regions. With this understanding of the dream state, researchers believe there is a future in using REM sleep for the maintenance of waking consciousness.

Similar experiences have been described by patients under the influence of psilocybin. Out of the four groups of psychoactive mushrooms, the Psilocybe genus of mushrooms produces the chemical compound psilocybin. The history of psilocybin is to be used in healing rituals that date back about 3,000 years. It was also used in Western medicine until 1971 when it was listed as a Schedule I substance, with Psilocin being responsible for the psychedelic effects (Passie et al., 2002). These mushrooms can be consumed in their fresh or dried forms, as capsules, and sometimes brewed into a tea. After consuming the mushroom, users report mild euphoria and increased feeling of the five senses. Psilocybin mushrooms are not known to cause addiction (Passie et al., 2002). Once a person consumes psilocybin, it is converted into psilocin in the body. Psilocybin (O-phosphoryl-4-hydroxy-N,N-dimethyltryptamine) is converted into psilocin, a pharmacologically active compound. This conversion process takes place through a dephosphorylation reaction under strongly acidic conditions. Alkaline phosphatase is the enzyme which drives the reaction (Fig. 1) (Passie et al., 2002). Psilocin mimics the effect of serotonin. It attaches to serotonin receptors and stimulates the excessive release of the neurotransmitter (Passie et al., 2002).

Dephosphorylation of psilocybin into psilocin

Physiological changes during REM and psilocybin

The study and report of the effects of psilocybin usage strongly focus on the neurobiological changes. There are a few reports of physiological changes in studies of psychedelic mushroom use, but the changes are distinct and very common. Fortunately, the physiological changes during REM sleep are well studied. The body experiences many physiological changes during dreams compared to the normal state. REM is categorized by eye movements during the stage. In slow-wave sleep the eyes drift apart, but in REM the eyes move in tandem, similar to their behavior in the awake state. Moreover, it is hypothesized that in order to conserve energy, a person’s body temperature drops to its lowest point of the night during REM, which can be as low as 96.5 °F (Brands et al., 1998). Subjects using psilocybin have been found to have the opposite effect. When using psilocybin, it is reported that the person will have an increased body temperature (Brands et al., 1998). Before REM sleep, blood pressure and heart rate decrease in order to adapt to reduced metabolic needs (Penzel et al., 2003; Purves et al., 2001). However, when the body reaches REM, these activities increase to levels that are almost as high as the awake state. Although the reason is not well understood, subjects using psilocybin have been found to have increased heart rate and blood pressure, just like during REM sleep (Brands et al., 1998). In REM there is also a paralysis of large muscles and twitching of the fingers and toes during REM (Purves et al., 2001). Similarly, research shows that the use of psilocybin causes muscle relaxation, weakness, and twitching (Brands et al., 1998).

Recent studies have revealed the potential use of psilocybin mushrooms in both research and therapies. The research done under Dr. Carhart-Harris has revealed astounding results on the effects of psychedelics on the brain. In Harris’ study done in 2012, researchers used psilocybin to study the neural correlates of the brain on the psychedelic. Fifteen subjects were intravenously given either a placebo (10 mL of saline) or psilocybin (2 mg in 10 mL of saline). The infusion was done over a sixty second time period and the subjects would feel the results almost immediately. Before the infusion, the subjects were placed in an MRI. The study was done using an arterial spin labeling perfusion, and was done again using a blood- oxygen level dependent fMRI. In both cases, the subject was asked to rate the intensity of the image of a fixation cross at specific

Cerebral blood flow in the thalamus, anterior cingulate, and posterior cingulate cortex before and after psilocybin infusion, compared to placebo infusion.

times; once immediately after the start of the MRI, prior to the infusion, six minutes after the infusion, and finally twelve minutes after the infusion. The results were not what they expected. Studies researching the neuronal functionality agree that activation of the amygdala is higher during dreaming (Braun et al., 1997; Maquet et al., 1996; Nofzinger et al., 1997). In addition, during the dream state there is a partial activation of limbic regions of the forebrain, which are involved in memory and emotion. In research done by John Hobson (2009), there was a focus on the activation of the default mode network, compared to the brain regions previously discussed. Multiple studies done using PET by Hobson have shown a decrease in activity in the lateral prefrontal cortex and posterior cingulate cortex during REM The study revealed that there was a significant decrease in cerebral blood flow in the regions that made up the default mode network, as previously discussed. Both MRI’s showed decreases in blood flow in the thalamus, prefrontal cortex, posterior cingulate cortex, and anterior cingulate cortex (Fig. 2). The study also found that there was increased brain activity in the parts of the brain that play a role in visual imagery (Carhart-Harris et al., 2012). Based on these results, researchers were able to make conclusions about the neural correlates of the brain. Moreover, they were able to understand why the default mode network had decreased cerebral flow and other parts of the brain involved in the senses had increased blood flow. Dr. Carhart-Harris describes the DMN as a central hub for the rest of the brain. When there is normal activity to the DMN and normal integration of the key brain networks, the senses are constrained and precise. Therefore, all humans are able to see the world in a similar way if these brain networks are functioning correctly. However, when there is decreased integration of the key brain networks, like after consuming psilocybin, cognition and the senses are unconstrained, giving a sense of euphoria. Studies have suggested that consuming psilocybin places a person in a “waking dream state”. 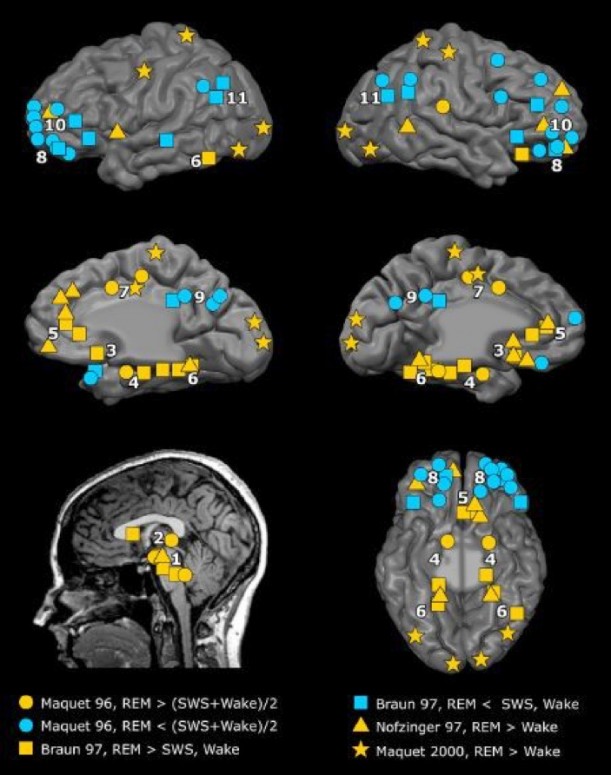 Studies researching the neuronal functionality agree that activation of the amygdala is higher during dreaming (Braun et al., 1997; Maquet et al., 1996; Nofzinger et al., 1997). In addition, during the dream state there is a partial activation of limbic regions of the forebrain, which are involved in memory and emotion. In research done by John Hobson (2009), there was a focus on the activation of the default mode network, compared to the brain regions previously discussed. Multiple studies done using PET by Hobson have shown a decrease in activity in the lateral prefrontal cortex and posterior cingulate cortex during REM sleep, compared to the waking state and lucid dreaming (Fig. 4) (Hobson et al., 2009). The similarities and differences of these findings, compared to psilocybin, could lead to a deeper understanding of the functionality of certain brain regions. 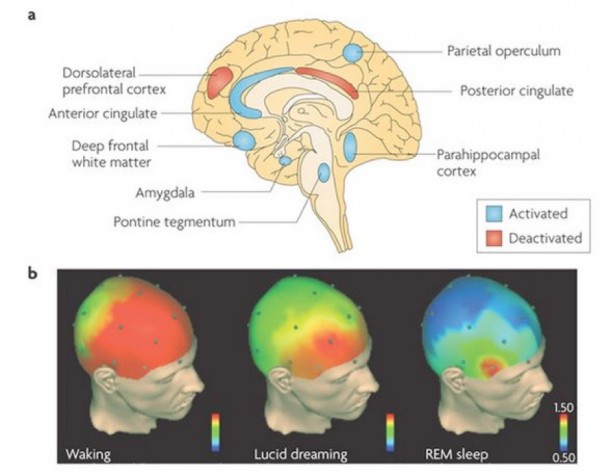 A. Red signifies the deactivation in brain regions. Results showed a deactivation of the lateral prefrontal cortex and posterior cingulate cortex. All other brain regions studied showed an increase of activity, denoted by the color blue.

Scientists believe that psilocybin mushrooms place people into a ‘waking’ dream state. The reasons for this are that these mushrooms create brain states that usually only occur when a person is sleeping. Research done by Dr. Carhart-Harris concludes that there is increased brain function in areas of the brain that are associated with emotion, due to the lack of cerebral blood flow to the default mode network. These same areas that are associated with emotion and memory also have increased functionality during dreaming.

Analyzing the biological similarities and differences of psilocybin use and dreaming not only allows researchers to gain an understanding of the functionality of the brain, but also opens up the doors for using psilocybin mushrooms as a therapy for diseases like depression and anxiety. It may seem counterintuitive to prescribe a drug that would increase functionality in the part of the brain that controls emotions, but the neural connectivity studied by Dr. Carhart-Harris speaks to its possible efficacy. Studies have shown that depression can be linked to REM sleep dysregulation (Palagini et al., 2013). A possible area of study for the future would be to

see if placing people into a waking dream state using psilocybin could treat depression and anxiety.

Another possible area to study would be the default modes network role in depression and anxiety. Carhart-Harris believes that people with these diseases suffer from a strict theory of mind and sense of self due to increased areas of the DMN, such as the posterior cingulate cortex and prefrontal cortex. If psilocybin could reduce the functionality of these brain regions, it is possible that people with depression and anxiety would see the world in a different way.

This research on psychedelic mushrooms gives the possibility for future use of psychedelics in the scientific and medical community. Its current legal status, however, makes future studies on psychedelics difficult. Yet, researchers remain hopeful that these studies will shift community attitudes towards psychedelics.

Carhart-Harris, et al. 2012. Neural correlates of the psychedelic state as determined by fMRI studies with psilocybin. Proceedings of the National Academy of Sciences 109: 2138-2143.